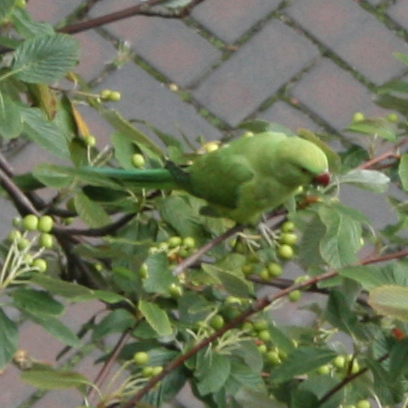 Rose-ringed parakeets have a bright green plumage, a red beak, and measure up to 40 cm (approximately 16 in) in length. Adult males have in addition a red neck-ring, while females and immature birds of either sex show either no neck ring, or display shadow-like pale to dark gray neck rings.

Although these are tropical birds, this species has seemingly well adapted to living in urban areas and can be considered as feral birds. They live in cities in the Netherlands, but also other European cities in England, Belgium and Germany. They became established in Europe during the mid to late 20th Century from introduced and escaped birds.

Thank you. I have been trying to catch them on photo for quite some time.