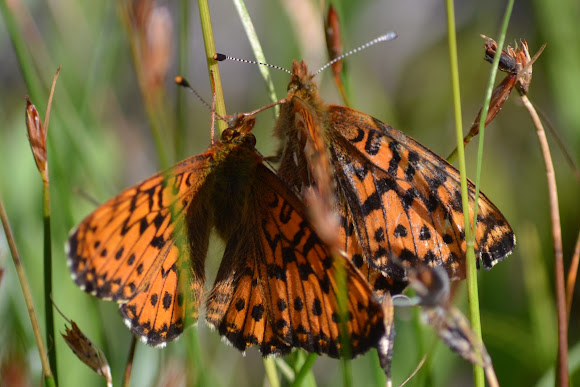 I spotted these Freija Fritillaries in some patches of grass on a rocky cliff and in a marsh clearing on the Bird Creek Meadows trail at Mount Adams in Washington.

The Freija Fritillaries were seen in a marshy clearing on the Bird Creek Meadows trail and near Woolly Pussytoes (Antennaria lanata) on the rocky edge of the trail at higher elevations. The most prominent flowering plant on the trail was Alpine Aster (Oreostemma alpigenum).

Based on the elongated white zigzag pattern and black and white scalloped band in the middle of the hindwing I have decided to identify this fritillary as a Freija and not an Arctic. To my knowledge, this is the first record of a Freija Fritillary in Washington.