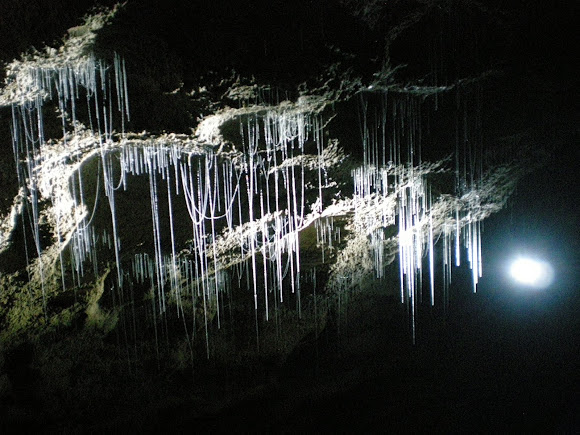 These photos show several glow worms. Each worm is about 10cm long and sits horizontally across the rock, suspended by silk sacs that it produces. Each worm lowers several silk threads that trap flying oraganisms that are brought into the caves by the river.

It occurs throughout the country in limestone caves, unused mining tunnels, along stream banks, in damp bush-clad ravines, in damp shady crevices, and under tree-fern fronds in rain forests. The Glow-worm Grotto in Waitomo Cave has become world famous because of the tens of thousands of glow-worm larvae which live on the walls, ceilings, and stalactites of the grotto.

Have always read about this but only seeing it for the very first time today. I'd appreciate a close up. Really!

If You ever make it to New Zealand Waitomo caves is well worth the look. They used to have one cave where you float down the river underneath them all. But now they have opened two new caves where you walk through the area and get within a foot of glowworms and see the " worms" quite clearly couldnt take a photo that close cause it would have disturbed the worms.

Wow! That is really neat.

Too cool, and great photo. We have a few glow worm (actually, they're gnat larvae) caves in Tasmania, but I've yet to make the effort to go see them.