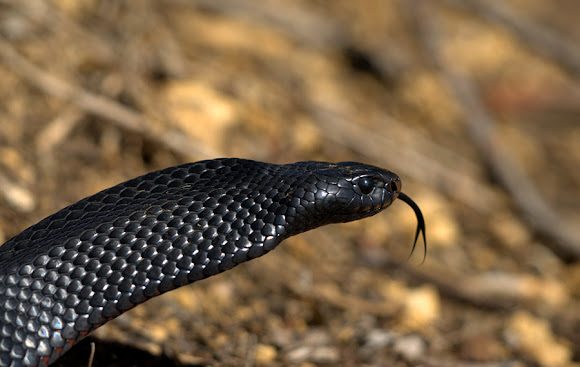 The Red-bellied Black Snake, Pseudechis porphyriacus, is a species of elapid snake native to eastern Australia. Though its venom is capable of causing significant morbidity, it is not generally fatal and less venomous than other deadly Australian snakes. It is common in woodlands, forests and swamplands of eastern Australia. It is one of Australia's best-known snakes, as it is common in urban areas along the eastern coast of Australia. It has an average total length of 1.5 to 2 metres.

The Red-bellied Black Snake is native to the east coast of Australia. The Red-bellied Black Snake can be found in the urban forest, woodland, plains and bushland areas of Canberra, Sydney, Brisbane, Melbourne, Cairns and Adelaide. It is most commonly seen close to dams, streams, billabongs and other bodies of water. To be precise i found this one in the Hunter valley NSW.

Hehe, some people called me crazy ;).

Whew. Don't think I can try doing what you did in the 3rd photograph :-)

Well.. I have one living down by the creek! She is very shy! Hope you know first aid!

Hehe, thanks. Actually i want to find one and take pictures like this :).