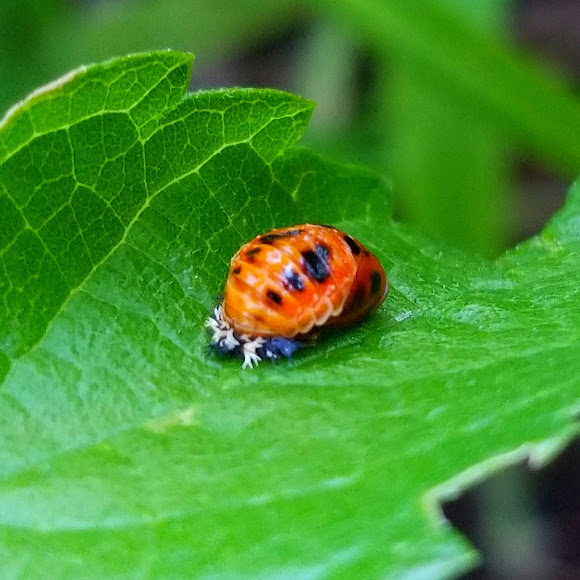 It is a small pupae that has orange and black patterns. This species was introduced to North America as a pest control for aphids and scale insects. These were on Hackberry, (celtis) feeding on aphids.

Harmonia axyridis is native to eastern Asia from central Siberia, Kazakhstan, and Uzbekistan in the west, through Russia south to the Himalayas and east to the Pacific coast and Japan, including Korea, Mongolia, China, and Taiwan. As a voracious predator, it was identified as a biocontrol agent for aphids and scale insects. Consequently, it has been introduced into greenhouses, crop fields, and gardens in many countries, including the United States and parts of Europe. The species is now established in the United States, Canada, Argentina, Brazil, Italy, the United Kingdom, Denmark, Sweden, Norway, Finland, the Netherlands, Belgium, Israel, Luxembourg, France, Germany, the Czech Republic, Slovakia, Hungary, Romania, Serbia, Croatia, Bosnia and Herzegovina, Poland, and South Africa.