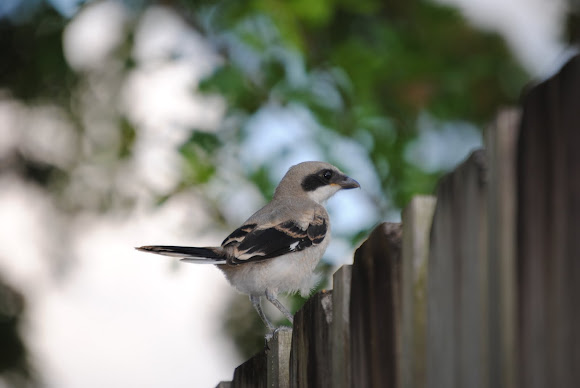 Loggerhead Shrikes are trim, businesslike birds, a bit smaller than robins. The back is grey, the wings are black and white, the chest and belly are white, and the tail is black with white stripes along the sides. A notable field mark is the mask, a black stripe around the eyes that extends right across the forehead. Closer inspection of the bird will reveal the heavy, hooked beak. Compared to other perching birds, shrikes appear to have a disproportionately large, or logger, head, from which the common name of the species is derived. Shrikes are usually seen perched on utility wires, fenceposts, or dead branches protruding from the crowns of trees or shrubs. They fly with a fluttering, gliding motion showing large white patches on their wings and white stripes along the outside of the tail. When hunting, shrikes usually swoop down from their perch, flutter close to the ground across open areas, and then fly up to land on another perch. During the spring courtship period, and rarely later in the year, Loggerhead Shrikes occasionally break into song. Both males and females sing. The song is rather an unmusical series of notes. Other calls are a variety of shrieks uttered when alarmed. (In fact, the name shrike is a variant of shriek. ) Another alarm call that is occasionally heard is a repeated tink sound, like that made by tapping two pieces of metal together. Loggerhead Shrikes are somewhat smaller than Northerns. The black facial mask on the Northern Shrike does not usually extend across the forehead above the beak as in the Loggerhead. Although in their first year Loggerhead Shrikes closely resemble adults, young Northern Shrikes do not. They have a brownish colouration, and adult Northern Shrikes retain faint brownish barring on their underparts. Finally, the beak of the Northern is longer than that of the Loggerhead. A side view of the Northern shows the beak equal to about half the front to back length of the head, whereas the Loggerhead's beak is substantially shorter in proportion to the head length.

The habitat preferred by Loggerhead Shrikes for home territories usually has certain features, including the following: grassy pastures that are well-grazed or mowed, but not bare, where they can spot prey easily in the sparse cover; shrubs or small trees, and perches in the form of dead branches, utility wires, or fences from which to hunt. Loggerhead Shrikes at all seasons eat mainly large insects with grasshoppers and beetles as prominent items. In the breeding season their diet is principally composed of insects. However, in cold weather or when insects are less available, mice, small birds, small snakes, lizards, or frogs are taken.

The Loggerhead Shrike is a songbird that hunts like a small hawk. Preying on insects and other small animals (including birds). In the past they were widely distributed around farms and suburbs. They have often been known as butcherbirds, because their habit of impaling prey on thorns reminded people of the way butchers hang meat. By this ingenious method, shrikes compensate for the lack of the talons with which birds of prey hold their catches while they bite off edible chunks. A close relative, the Northern Shrike, has also adapted to the lifestyle of a hawk. In the past few years, the Loggerhead Shrike has aroused serious concern because of its declining numbers throughout its range in Canada and the United States.