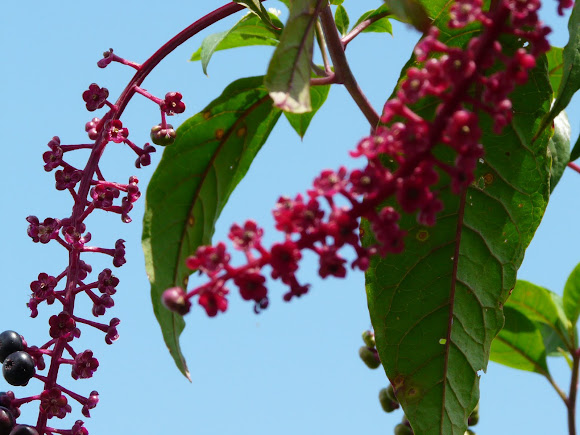 All parts of pokeweed are toxic including the raw aboveground leaves sprouting in the early spring. The poison is found in highest concentrations in the rootstock, less in the mature leaves and stems, and least in the fruits. (Green fruits are slightly more toxic) Young leaves, if collected before acquiring a red color, are edible if boiled for 5 minutes, rinsed, and reboiled. Berries are toxic when raw but cooked juice is edible (the seeds remain toxic after cooking). However, it may be difficult to identify exactly when leaves have no red color whatsoever; an incorrect picking may result in a poisoning. In a traditional Cherokee recipe for fried poke stalks, young stalks are harvested while still tender, peeled to remove most of the toxin, washed, then cut into pieces and fried like okra with cornmeal.

The birds love the ripe fruit of the pokeweed (also known as Inkberry).