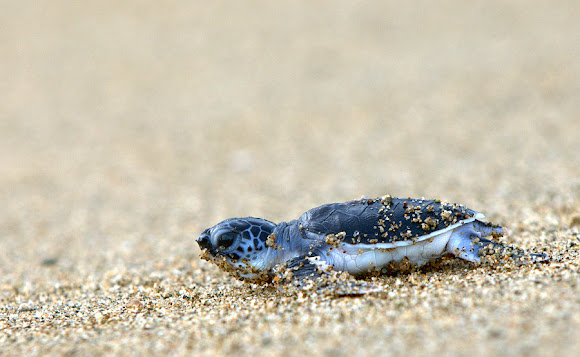 The Green sea turtle (Chelonia mydas) or green turtle is a large sea turtle of the family Cheloniidae. It is the only species in the genus Chelonia. Its range extends throughout tropical and subtropical seas around the world, with two distinct populations in the Atlantic and Pacific Oceans.Their common name derives from the usually green fat found beneath their carapace (upper shell).

The range of C. mydas extends throughout tropical and subtropical oceans worldwide. There are two major subpopulations, the Atlantic and the eastern Pacific subpopulations. Each population is genetically distinct, with their own set of nesting and feeding grounds within the population's known range.

Took this during my Trip too east Java on the Sukamadebeach.

Congratulations Julius, we have chosen this little guy to highlight World Turtle Day!

"Today is World Turtle Day! World Turtle Day is sponsored by American Tortoise Rescue, and aims at bringing attention to turtles and tortoises and encourage action to help them survive and thrive. Our Spotting of the Day is a Green Sea Turtle hatchling (Chelonia mydas) released is Java, Indonesia, as part of a conservation effort. Green sea turtles are classified as endangered by the IUCN. They are threatened at all life stages from eggs to adults by direct human activities, as well as through degradation of both their terrestrial and marine environment. We hope the little guy made it to sea! "

awesome photo! I hope he made it to the sea!

How lucky!! What an incredible moment to have witnessed! Thank you for sharing.

Hope it get to the sea without any problem..

Oh my! How cute is that!! Wonderful spotting!!

Great photo.. I have moved it to the reptiles. Turtles and tortoises are reptiles, the only ones to have a shell.

Thank you all for your comments!

Julius, lucky you to have been a part of such a happy occasion.

It was part of a turtle conservation release. Eventhough it wasn't 100% wildlife it was worth it :).

Amazing capture. Did you catch this little guy just hatching, or was it part of a turtle conservation release?

Beautiful what else can i say!