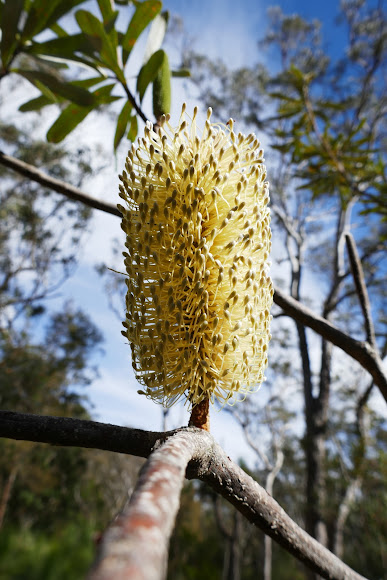 Spotted on the Mt. Mathieson Trail, in a clearing of tall grass and open forest at Mt. Mathieson, Spicers Gap. This area is a section of Main Range National Park, a World Heritage Area. Australian native flora in a mix of dry eucalypt forests and subtropical rainforest. It was only in this one clearing that I noticed any banksias. Exposed, sunny aspect. In this area, I would expect soils are mostly balsalt, as many of the rocky outcrops are also basalt.

May Gibbs, an Australian author, wrote a series of children's books called Snugglepot and Cuddlepie, the first book in the series published in 1918. Snugglepot and Cuddlepie, the gumnut babies, are the protagonists of the story and are modeled on the appearance of young Eucalyptus (gum tree) nuts. The villains are the Banksia Men which are modelled on the appearance of aged Banksia 'cones', with follicles for eyes and other facial features. The second photo in this series shows the Banksia Men (which really could be one of any number of Banksia species). https://en.wikipedia.org/wiki/Snugglepot...