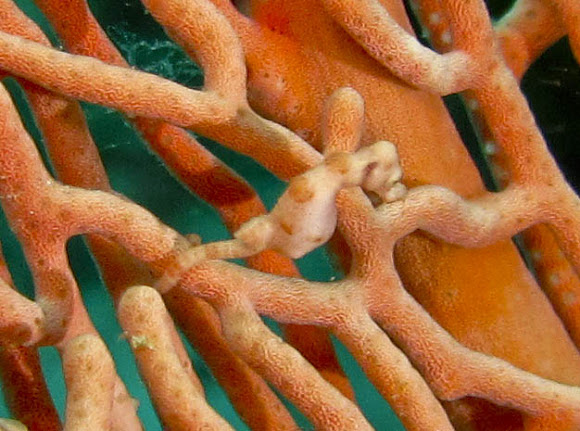 Taken during dive in Raja Ampat. Hippocampus denise is tiny, growing only to a total length of 1.5 cm (5/8 inch). They are usually solitary, though they may be found in small groups on their host gorgonians, colonies of the genera Acanthogorgra and Annella, in depths of up to 70m[1].

They can be found off southern Japan, Indonesia, northern Australia and New Caledonia[1]. Its natural habitat is coral reefs. The pygmy seahorse is undoubtedly one of the most well camouflaged species in the oceans, being very difficult to spot amongst the gorgonian coral it lives in. The camouflage is so effective that the species wasn't actually discovered until its host gorgonian was being examined in a lab.

wow, that is amazing! it blends in really well!!

Beautiful... And welcome to Project Noah!

How one would spot that is beyond me!