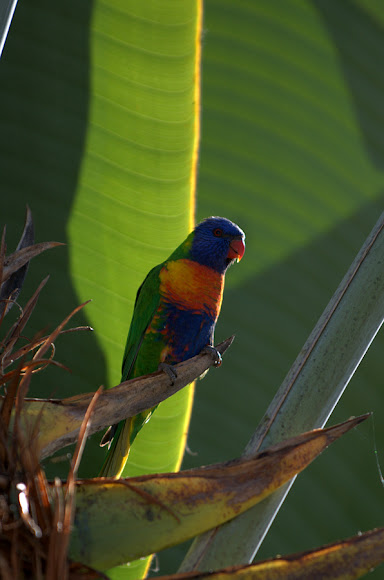 The Rainbow Lorikeet is a medium sized parrot, with the length ranging from 25–30 cm (9.8-11.8 in) in size, and has a wingspan of about 17 cm (6.7 in). The weight varies from 75–157 g (2.6–5.5 oz). The plumage of the nominate race, as with all subspecies, is very bright. The head is deep blue with a greenish-yellow nuchal collar, and the rest of the upperparts (wings, back and tail) are deep green. The chest is red with blue-black barring. The belly is deep green, and the thighs and rump are yellow with deep green barring. In flight a yellow wing-bar contrasts clearly with the red underwing coverts. There is little to visually distinguish between the sexes. Juveniles have a black beak which gradually brightens to orange in the adults. The markings of the best known subspecies T. h. moluccanus resemble those of the nominate race, but with a blue belly and a more orange breast with little or no blue-black barring.[8] Other subspecies largely resemble either the nominate race or T. h. moluccanus, or are intermediate between them. Two exceptions are T. h. flavicans and T. h. rosenbergii. In the rather variable T. h. flavicans the green of some individuals is dull, almost olivaceous, but in others the green hue approaches that typical of the Rainbow Lorikeet. T. h. rosenbergii is highly distinctive and several features separates it from all other subspecies: Its wing-bars are deep orange (not contrasting clearly with the red underwing coverts in flight), the entire nape is yellow bordered by a narrow red band and the dark blue barring to the red chest is very broad.

In Australia, it is common along the eastern seaboard, from Queensland to South Australia and northwest Tasmania. Its habitat is rainforest, coastal bush and woodland areas.