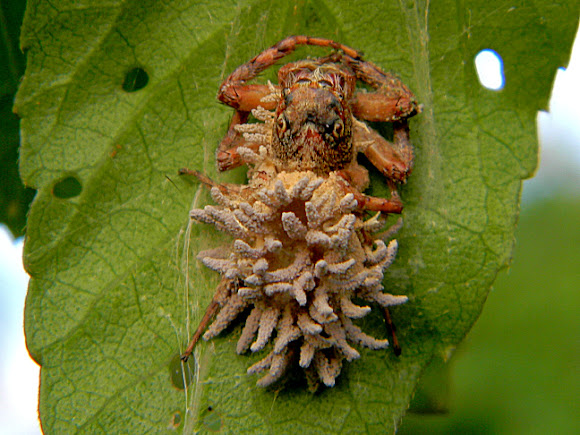 An unidentified (jumping?) spider killed by a massive fungal infestation. It looks like one of the Gibellula species (a.k.a. Torrubiella) as (genus) was suggested below. There is more than one species with visual (naked eye) similarity to this specimen. This ID must be regarded as PLAUSIBLE at best.

awful for the spider but what a spotting ! I hope this kills the spider quickly...

Thanks very much, Tom!

Thanks very much Braulio and Noel!

Incredible!
Have you ever seen PLANET EARTH: JUNGLES?
Is an impressive documental about the wildlife in rainforests and there I saw fungus like those. Nice picture!

Fantastic photo! It's amazing the distruction that fungus causes to the body.

Yes Thanks, I intend to upload the images once I locate the originals. No microphotographs available...Yes it is not a firm ID, amended to indicate this.

and the recommendation for uploading this to MushroomObserver still stands, with microphotos if at all possible.

Not possible to ID without a microscope. __Gibellula pulchra__ is only one of many entomopathogens that occur on adult arachnids. Knowing the ID of the host may be critical as well.

I wasn't part of PN when you put this up - what an amazing spotting ! and very clear photos too...

After a horrendously long time, I am moving this spotting from arthropods to fungi and giving it an (partial) ID. Thanks again to DaniKisso for his species suggestion so many months ago.

Thanks. No I didn't. Yes, at one of my locations. Thanks for the tip.

Outstanding. Did you save the specimen? Do you have access to a microscope? I'd highly suggest uploading this to MushroomObserver.org