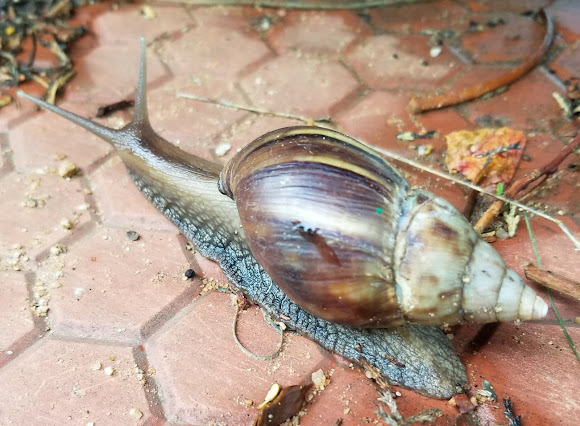 This snail was on a pathway in Brindavan Gardens. Achatina fulica is a hermaphrodite - each individual has both testes and ovaries and is capable of producing both sperms and ova. Self-fertilisation rare, occuring only in small populations. Snails of similar size show bilateral mating, while those of unequal size show unilateral mating with the larger one acting as the female. Mating behaviour includes bringing heads and front parts against each other. They can live in the wild for up to ten years, and in captivity for about 5-6 years.This snail is a macrophytophagous snail and feeds on wide variety of plants, fruit and vegetables. Because of its prolific feeding habitats, it can cause significant damage to agricultural and horticultural crops. According to Raut and Barker (2002) Achatina fulica feeds on more than 500 plants of agricultural and horticultural importance, including cuttings and seedlings of plants. Sadly the Giant African Land Snail (Achatina fulica) is considered as one of the world’s most damaging 100 invasive alien species. Two individuals of the Giant African Snail were brought to India from Mauritius by the pioneer of malacology in India, William Benson, in 1847. Benson left India soon after his return from Mauritius and handed the snails to a friend and neighbour in Chowringee, Kolkata, and it was the neighbour who subsequently released them in his garden. From these two individual snails the species spread throughout much of South Asia. This species used to be a native of Eastern Africa mainly from Kenya and Tanzania. It is introduced purposefully and accidentally to many parts of the globe for medicinal purposes, food and for research purposes (Raut and Barker 2002). It is now present in most of the Pacific and Indian Ocean Islands.

This snail was spotted in Brindavan Gardens near Mysore Karnataka, India

Amazing spotting. How big was this snail?

Great close-up Saturniidae. Thanks for sharing.