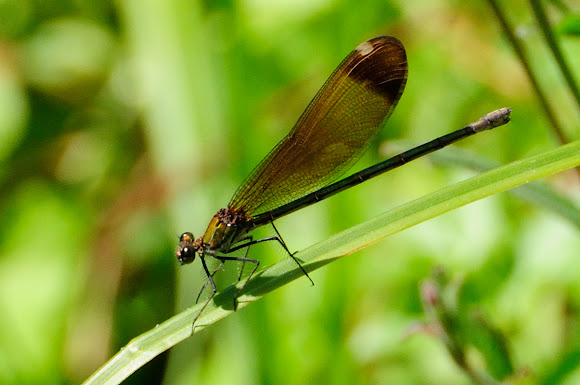 Female. This is a species of damselfly which is found in western mediterranean Europe. Medium size (50 mm) and wingspan above 60 mm. Males have a dark red body, sometimes blackish, with copper sheens that are sometimes missing. The underside of the 3 last abdomen segments is a uniform pink or bright red colour. The wings show a dark area. The base shows a hyaline area with an oblique edge from the dark area. The dark area touches the base of the wing on the fore edge. There can also be a hyaline area at the apex of the wings. This variable-shaped hyaline area can be used to separate three sub-species. Females are metallic green to bronze coloured. You can easily tell them apart with the short dark apical mark on the hind wings. The female's wings bear a white pseudopterostigma. The Copper Demoiselle's tibias are sometimes brown while they are always black on other Calopterygidae species. It is often found along streams and rivers. Marked sexual dimorphism. Males are red or copper colour. Adults of this species can be seen between the months of April and September

It can be found southern areas of Europe. Its range includes France, Italy, Morocco, and Spain, among other areas. This species prefers clear streams and rivers, where it occurs with other Calopteryx, although these are often smaller and more shady habitats. They are also found in larger waters in view of full sunlight.

It is threatened by habitat loss due to increasing drainage and agricultural practices, as well as some water pollution.