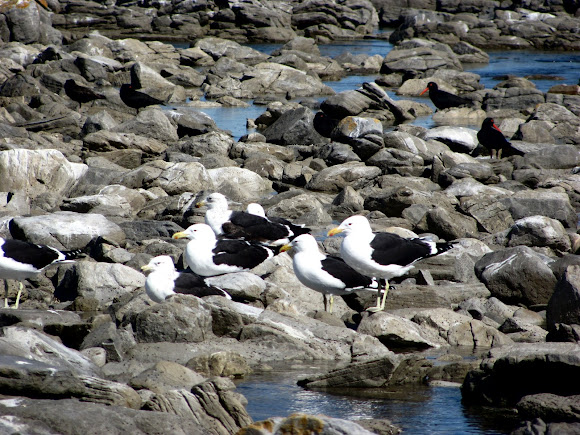 The adult Kelp Gull has black upperparts and wings. The head, underparts, tail and the small "mirrors" at the wing tips are white. The bill is yellow with a red spot, and the legs are greenish-yellow (brighter and yellower when breeding, duller and greener when not breeding). The call is a strident ki-och. Juveniles have dull legs, a black bill, a dark band in the tail, and an overall grey-brown plumage densely edged whitish, but they rapidly get a pale base to the bill and largely white head and underparts. They take three or four years to reach maturity. The African subspecies L. d. vetula is sometimes split as the Cape Gull, L. vetula. It has a more angular head and a smaller shorter bill. The adult has a dark eye, whereas the nominate Kelp Gull usually has a pale eye. Young Cape Gulls have almost identical plumage to similarly aged Kelp Gulls.