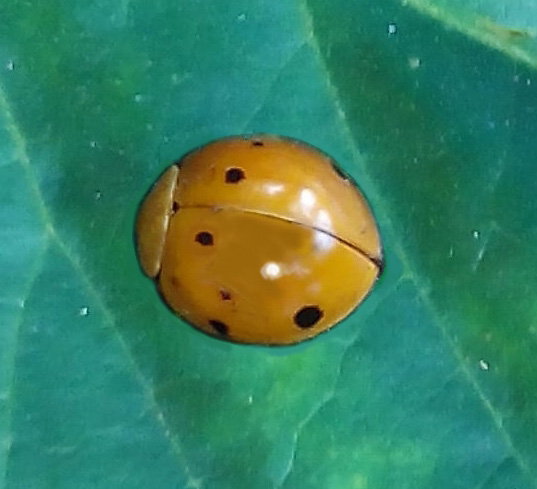 Coccinellidae; Coccinellinae; Coccinellini; Coelophora; Coelophora mulsanti Montrouzier, 1861. This entire dorsal surface of this Ladybird is covered in a cloudy Ochreous colour and seems to have random lighter and darker areas which blend into each other so well that it the effect is almost unnoticeable. Then there are a number of irregularly shaped black spots of various sizes which are not symmetrically arranged. So when I took these photos I jotted down that it was almost certainly a Coelophora inaequalis. That is how it remained in my home catalogue until now. When I was preparing to upload this spotting, I routinely did a little checking to avoid embarrassment (until I joined Project Noah, nobody ever saw what I had written down in my notes). So I was surprised when I came across an Australian website: https://www.ento.csiro.au/biology/ladybi... The information given here is very compelling and I feel that I have got this I.D. right despite the fact that the species pages are still under construction. Everything else in this site is so well presented and so professional that I felt I was being gently guided to the right I.D. It turns out that the species C. mulsanti was named after the great nineteenth century entomologist Mulsant who had constructed the Genus Coelophora.

This Variable Ladybird was spotted on a the leaf of a Mango Tree (Mangifera indica) which had fallen to the ground. The leaf was still fresh and appeared to have been cut by some other insect in the canopy. It may not be relevant, but on the same leaf, there was another Beetle, Heteroneda billardieri. So I have include a photo showing both together as spotted. When searching the internet re. Coelophora mulsanti, I came across a few pictures which also show these two beetles on the same leaf. Is this a possible example of species interaction?

In 1866,Mulsant unwittingly documented the same species as C. mulsanti and called it Coelophora ochracea. This was 5 yrs. after Montrouzier had named it . So Mulsant's species name was relegated to a synonym. Back in the day, communication was infinitely more difficult and many synonyms were created. But the name C, ochracea got my attention because when I notated the above photos in my collection back in 2015, I used the same description mentioning the colour "ochra" and at that time had no idea that the species was at one time called C. ochracea.