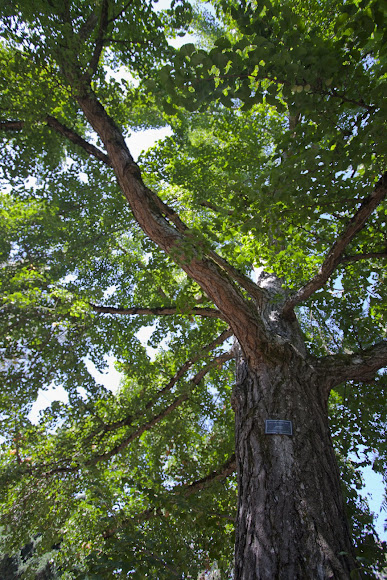 * "Ginkgoes are very large trees, normally reaching a height of 20–35 m (66–115 feet), with some specimens in China being over 50 m (164 feet). The tree has an angular crown and long, somewhat erratic branches, and is usually deep rooted and resistant to wind and snow damage. Young trees are often tall and slender, and sparsely branched; the crown becomes broader as the tree ages. During autumn, the leaves turn a bright yellow, then fall, sometimes within a short space of time (1–15 days). A combination of resistance to disease, insect-resistant wood and the ability to form aerial roots and sprouts makes ginkgos long-lived, with some specimens claimed to be more than 2,500 years old." * from wikipedia entry

* "Although Ginkgo biloba and other species of the genus were once widespread throughout the world, their range shrank until by two million years ago it was restricted to a small area of China. For centuries it was thought to be extinct in the wild, but is now known to grow in at least two small areas in Zhejiang province in Eastern China, in the Tian Mu Shan Reserve. However, recent studies indicate high genetic uniformity among ginkgo trees from these areas, arguing against a natural origin of these populations and suggesting that the ginkgo trees in these areas may have been planted and preserved by Chinese monks over a period of about 1,000 years.[10] Whether native ginkgo populations still exist has not been demonstrated unequivocally." * from wikipedia entry

This is a Portland Heritage Tree here in Portland, OR. It's heritage tree number is 205.