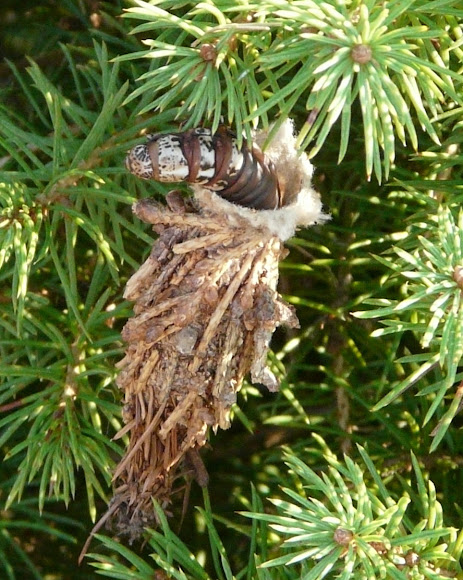 The Evergreen Bagworm is a moth that spins its cocoon in its larval life, decorating it with bits of plant material from the trees on which it feeds. Eggs hatch from early April to early June (earlier in the south) and larvae emerge from the carcass of their mother in her case. Newborn larva emerge from the bottom of the hanging case and drop down on a strand of silk. The wind often blows the larva to nearby plants where it begins its new case from silk and fecal material before beginning to add leaves and twigs from its host. When mature in mid-August, the larva wraps silk around a branch, hangs from it, and pupates head down. The silk is so strong that it can strangle and kill the branch it hangs from over the course of several years as the branch grows. Adult males transform into moths in four weeks to seek out females for mating. The female never leaves the cocoon, requiring that the male mate with her through the open end at the back of the case. She has no eyes, legs, wings, antennae, and can't eat, but she emits a strong pheromone to attract a mate. After her death with hundreds to several thousand eggs still inside, her offspring hatch and pass through her body, pupal shell and case over several months emerging to start their own cases. Later, her pupal case can be found, full of the yellow remains of eggshells.

Dana, last summer we literally had 100's of these hanging from our pines. I got up a ladder & pulled off all I could reach but I am sure there will plenty more this year. The only positive is the robins & bluebirds seemed enjoy the treat - I threw all the cocoons onto the grass & they were snapped up in no time at all!

Thanks Jacob! These are amongst the few critters I'm not pleased to see though as the silk from the cocoons has caused our conifers to die back.

I think you are spot on Dan! I've been through my guides & can't find anything remotely similar & this species is indigenous to PA - http://www.butterfliesandmoths.org/speci...

Hey Karen, what do think of this spotting? I'm not sure if its the correct ID but don't know what to suggest.
http://www.projectnoah.org/spottings/769...

Got here from the link on S Frazier's 'case moth'!
You have such lovely shots here!!
Thanks for the interesting info on such an amazing spotting!
I could have seen them, not sure if they are the same... unless I'm sure about their size! The ones I saw were about 1 cm.. :)
Good day, Karen!

Thanks Atul! I was excited when I spotted this little guy but not so much when I discovered they are a major pest round here. I removed about 50 or 60 cases from our pine trees & threw them out on the lawn for the bluebirds & robins to enjoy - natural pest control!

fantastic spotting Karen and great info
i have a similar spotting and will upload it soon
i did not have so much info about it and didnt know what it was until i saw S Frazier's spotting and your info thanks again for sharing such wonderful knowledge.