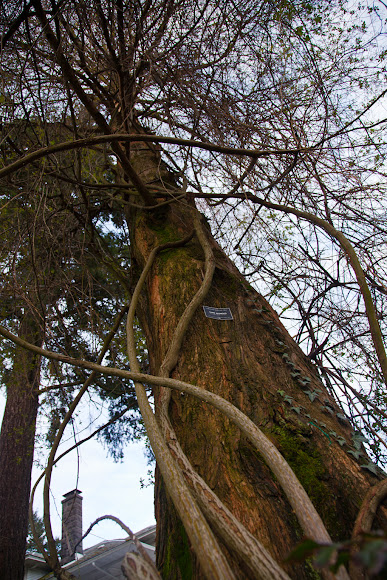 * "Metasequoia glyptostroboides, the Dawn Redwood, is a fast-growing, critically endangered deciduous conifer tree, sole living species of the genus Metasequoia, and one of three species of conifers known as redwoods. It is native to the Sichuan-Hubei region of China. Although shortest of the redwoods, it grows to at least 200 ft (61 m) in height. Metasequoia glyptostroboides (Dawn Redwood) Bonsai Tree Local villagers refer to the original tree from which most others derive as Shui-sa, or "water fir," which is part of a local shrine. Since that tree's rediscovery in 1943, the Dawn Redwood has become a popular ornamental tree in parks and gardens worldwide." * from wikipedia entry

This is a Portland Heritage Tree here in Portland, OR. It's heritage tree number is 253.