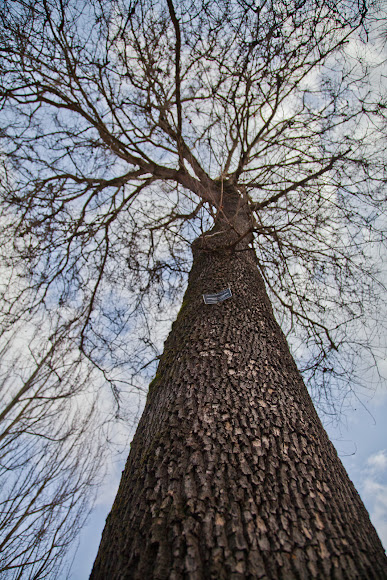 * "An American sycamore tree can often be easily distinguished from other trees by its mottled exfoliating bark, which flakes off in great irregular masses, leaving the surface mottled, and greenish-white, gray and brown. The bark of all trees has to yield to a growing trunk by stretching, splitting, or infilling; the Sycamore shows the process more openly than many other trees. The explanation is found in the rigid texture of the bark tissue, which lacks the elasticity of the bark of some other trees, so it is incapable of stretching to accommodate the growth of the wood underneath and the tree sloughs it off.[1] A sycamore can grow to massive proportions, typically reaching up to 30 to 40 meters (98 to 130 ft) high and 1.5 to 2 meters (4.9 to 6.6 ft) in diameter when grown in deep soils. The largest of the species have been measured to 51 meters (167 ft), and nearly 4 meters (13 ft) in diameter. Larger specimens were recorded in historical times. In 1770, near the junction of the Kanawha and Ohio Rivers, George Washington recorded in his journal a sycamore measuring nearly 45 feet (14 m) in circumference at 3 feet (91 cm) from the ground.[2] The sycamore tree is often divided near the ground into several secondary trunks, very free from branches. Spreading limbs at the top make an irregular, open head. Roots are fibrous. The trunks of large trees are often hollow. Another peculiarity is the way the leaves grow sticky, green buds. In early August, most trees in general will have—nestled in the axils of their leaves—the tiny forming bud which will produce the leaves of the coming year. The sycamore branch apparently has no such buds. Instead there is an enlargement of the petiole which encloses the bud in a tight-fitting case at the base of the petiole.[1] The characteristic bark of an American Sycamore Bark: Dark reddish brown, broken into oblong plate-like scales; higher on the tree, it is smooth and light gray; separates freely into thin plates which peel off and leave the surface pale yellow, or white, or greenish. Branchlets at first pale green, coated with thick pale tomentum, later dark green and smooth, finally become light gray or light reddish brown. Wood: Light brown, tinged with red; heavy, weak, difficult to split. Largely used for furniture and interior finish of houses, butcher's blocks. Sp. gr., 0.5678; weight of cu. ft., 35.39 lbs. Winter buds: Large, stinky, sticky, green, and three-scaled, they form in summer within the petiole of the full grown leaf. The inner scales enlarge with the growing shake. There is no terminal bud. Leaves: Alternate, palmately nerved, broadly-ovate or orbicular, four to nine inches long, truncate or cordate or wedge-shaped at base, decurrent on the petiole. Three to five-lobed by broad shallow sinuses rounded in the bottom; lobes acuminate, toothed, or entire, or undulate. They come out of the bud plicate, pale green coated with pale tomentum; when full grown are bright yellow green above, paler beneath. In autumn they turn brown and wither before falling. Petioles long, abruptly enlarged at base and inclosing the buds. Stipules with spreading, toothed borders, conspicuous on young shoots, caducous. Flowers: May, with the leaves; monoecious, borne in dense heads. Staminate and pistillate heads on separate peduncles. Staminate heads dark red, on axillary peduncles; pistillate heads light green tinged with red, on longer terminal peduncles. Calyx of staminate flowers three to six tiny scale-like sepals, slightly united at the base, half as long as the pointed petals. Of pistillate flowers three to six, usually four, rounded sepals, much shorter than the acute petals. Corolla of three to six thin scale-like petals. Stamens: In staminate flowers as many of the divisions of the calyx and opposite to them; filaments short; anthers elongated, two-celled; cells opening by lateral slits; connectives hairy. Pistil: Ovary superior, one-celled, sessile, ovate-oblong, surrounded at base by long, jointed, pale hairs; styles long, incurved, red, stigmatic, ovules one or two. Fruit: Brown heads, solitary or rarely clustered, an inch in diameter, hanging on slender stems three to six inches long; persistent through the winter. These heads are composed of akenes about two-thirds of an inch in length. October." * from wikipedia entry

* "In its native range, it is often found in riparian and wetland areas. The range extends from Iowa to Ontario and Maine in the north, Nebraska in the west, and south to Texas and Florida. Closely related species occur in Mexico and the southwestern states of the U.S.A." * from wikipedia entry

This is a Portland Heritage Tree here in Portland, OR. It's heritage tree number is 22.