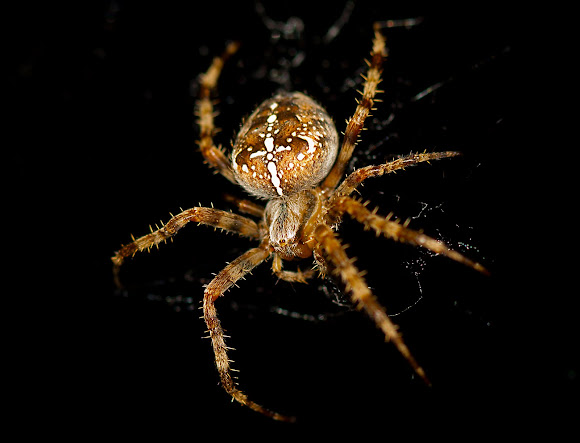 * " Both sexes are reddish-brown to medium brown, commonly with reddish-orange tones. A darker pyramid shape is located on the spider's dorsal abdomen, with a series of white dots and lines within it, in the shape of a cross. This white cross is what gives this spider one of its common names. These spiders spin orb-webs to capture flying insects. Webs are typically consumed by the spider before spinning a replacement web. Females continue to spin webs after maturing into an adult, but males typically do not. Once mature, males wander in search of females to mate. Egg sacs are produced in autumn, and deposited under leaves or in crevices. After their eggs are laid, the adult spiders typically die. In the spring, the eggs hatch and tiny golden spiderlings emerge." * from PSU website

* "Europe and parts of North America, in a range extending from New England and the Southeast to California and the northwestern United States and adjacent parts of southern Canada." *from wikipedia entry

These spiders are extremely common here in Portland, OR. They thrive in the yards and bushes of homes throughout the city.

awesome shot I love the detail on the abdomen