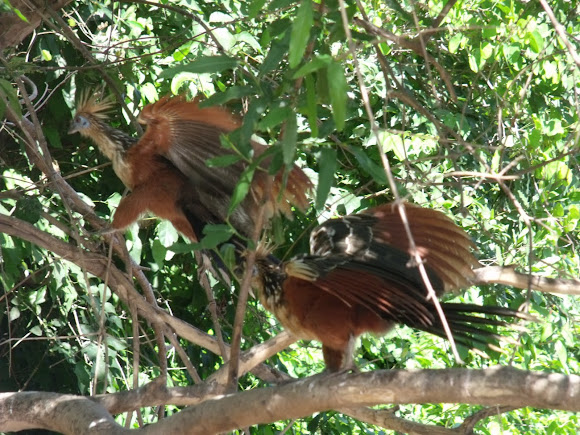 A bizarre looking bird. It has a large dusty red crest on its head with blue cheeks and a speckly white breast. An ungainly looking bird that often climbs clumsily through the branches of the tree it is in. Also known as "Stink birds" due to their unique method of digestion. They ferment the leaf matter that they ingest much the same was that a cow does. This results in a bad smell usually accompanying the birds, giving rise to their less flattering name

Commonly found in the trees alongside a River or other waterway.

As chicks, these birds have spurs on their wings. These are often debated as being a clue to the reptilian evolutionary past of birds. Due to these birds odd appearance, in previous years, much debate has been made as to how these birds should be taxonomically placed. In recent years scientists have made new discoveries which has enabled them to place them more closely related to cuckoos than to many other birds.