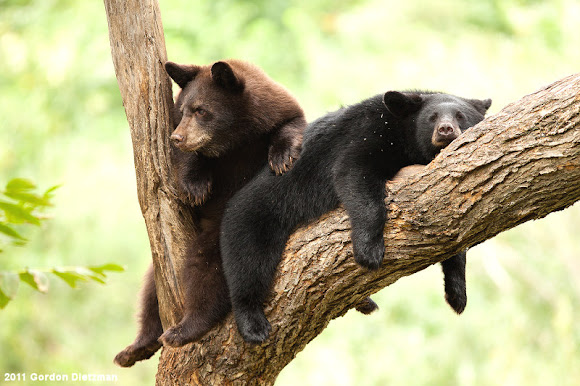 Black bears are medium-sized bears found in North America. The term "black" is a bit of a misnomer as these bears may be brown (cinammon), black, or even white (Kermode). The cubs in these photos represent both the brown and black coloration and are from the same litter.. Black bears may weight as much as 600 pounds, but most are much smaller. Males tend to be larger than the females.

These two cubs and a third sibling, not shown, were sent up a tree near me by the sow. She then disappeared into the forest and didn't come back for the cubs for about two hours. This particular family of wild bears was highly habituated to humans and not difficult to photograph.

Thanks Karen. Glad to have contributed.... They are a couple of silly lumps, aren't they? Love that description, but they were animated silly lumps, full of life, hanging around in the treetops while Mom was off doing whatever it was that she needed to do. I watched these cubs for quite some time and felt their force of personality. The brown one was active constantly pawing and trying to play. The black one was just wanting to nap....

Congrats Gordon, your bears are the stars of our Facebook caption contest today! https://www.facebook.com/photo.php?fbid=...

Lovely series, Gordon! They're a super cute bunch. What a life, just hanging out in the tree tops!

Thanks for the kind comments everyone. This was a very fun day. This was a great place to watch bear behavior.

Thanks p.young713, Thurd13 and Carolina for your kind comments. It was easy to get good shots of these charismatic cubs.

Wow Gordon, what a beautiful series!

Gordon this is one of the best pictures I have seen on Project Noah, great photos!

Thanks for the comments, everyone. Photographing bears is always an effort in patience and almost always a delight. They have so many facial expressions that express their individual personalities and are so intelligent that one can start identifying them as individuals.

Wow! I almost forgot my fear to bears with this series :)

Thanks for the details. Nice!