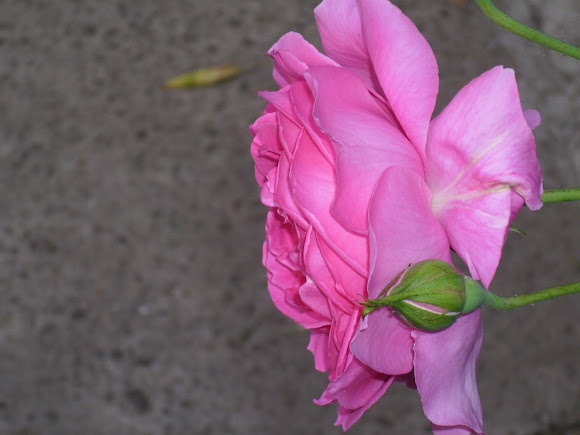 Rosa × centifolia (lit. hundred leaved/petaled rose; syn. R. gallica var. centifolia (L.) Regel), the provence rose or cabbage rose or Rose de Mai is a hybrid rose developed by Dutch rose breeders in the period between the 17th century and the 19th century, possibly earlier. It is a complex hybrid bred from Rosa gallica, Rosa moschata, Rosa canina, and Rosa damascena (Huxley 1992); its exact hereditary history is not well documented. Individual plants are shrubby in appearance, growing to 1.5–2 m tall, with long drooping canes and greyish green pinnate leaves with 5-7 leaflets. The flowers are round and globular, with numerous thin overlapping petals that are highly scented; they are usually pink, less often white to dark red-purple. R. × centifolia is particular to the French city of Grasse, known as the perfume capital of the world. It is widely cultivated for its singular fragrance—clear and sweet, with light notes of honey. The flowers are commercially harvested for the production of rose oil, which is commonly used in perfumery. Sylvia Plath mentions the cabbage rose in many of her earlier poems, such as The Thin People.

it is also called Damascene rose... not only cultivated in France for its fragrance, also in Middle East.