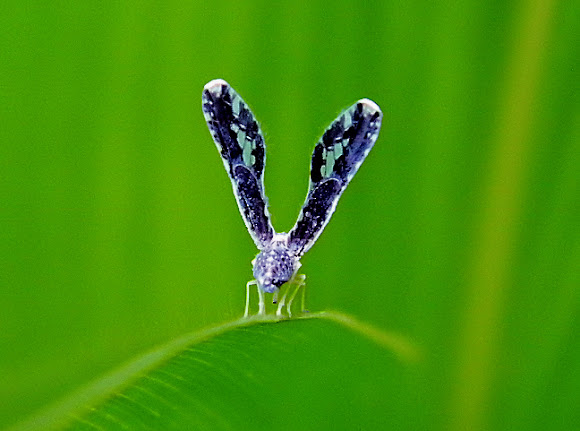 This is a Derbid planthopper, otherwise known by some as a long-winged Planthopper. It very much resembles Proutista moesta but a 1989 review of the genus in New Guinea was puzzled by this particular species' absence (save for 1 record) from New Guinea when it was abundant in western Indonesia. (http://www.naturalsciences.be/LIII/pdf/i... ). A current list of "Species of Derbidae known to occur in Indonesia and New Guinea" lists Proutista moesta with no mention of scarcity. (All of the other Proutista spp. mentioned in the 1989 work have now apparently been assigned to the genus Lydda and others). See http://www1.dpi.nsw.gov.au/keys/fulgor/i...

Spotted in a large semi-urban yard & garden next to a disturbed patch of remnant forest.

Poor late afternoon light for macro photography, but such a spectacular tiny creature!

Hi Scott, I am so happy to have the confirmation from you. I was also reluctant to suggest until I saw the Western Ghats in blue color in this page http://hemiptera-databases.org/flow/?pag...
Yet it was just inviting your attention and I am NO AUTHORITY regarding TAXO. Thank you Scott and Sunny too. :))

Just found a reference stating that it had never been recorded in New Guinea except for one record. That was a 1989 publication. However I also just found this http://www1.dpi.nsw.gov.au/keys/fulgor/i... which lists it for Papua, and no other Proutista species. So I will go with it. Thanks Joseph.

Thanks Joseph but it's ironic. This is the link that made me hesitate. It could be the genus (see my description), but moesta apparently has not been recorded from east of Sulawesi. See http://hemiptera-databases.org/flow/?pag... On taxa that I'm not familiar with, I like to see if it's been recorded here. Indonesia is a vast chain of islands and the flora and fauna vary. :-)

Is there a link with which to evaluate the suggestion?