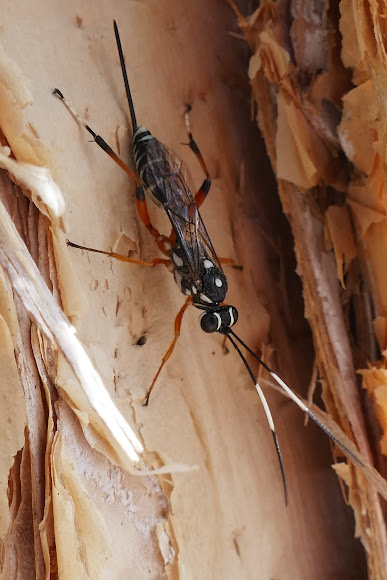 I spotted some unusual wasps that belong to the family group Ichneumonidae, but what I thought was in the Gotra genus appears to be Glabridorsum stokesii, a species introduced into New Zealand and Australia.... https://www.whatsthatbug.com/2008/02/15/... Many thanks to PN member Saturniidae27 for the ID suggestion. I've also found a number of common names, but whether or not they are the same species is unknown (see tags). These wasps have a white band on each antenna, and the body is black with white dots on the thorax and a white-banded abdomen. The legs are orange-brown in colour, but they also have white 'socks' on the hind legs. The ovipositor is medium in length and looks to be quite solid. Other subfamily members look almost identical but have a much longer and finer ovipositor, whilst others I've seen have been shorter. Their young are external parasites of pupae of moths and other insects, and some are parasites of spider egg-sacs (see notes). Family Ichneumonidae - Ichneumon Wasps.... https://www.brisbaneinsects.com/brisbane... Subfamily Phygadeuontinae - Banded Ichneumon Wasps.... https://www.brisbaneinsects.com/brisbane... Phygadeuontinae is the largest subfamily of the Ichneumon Wasps. Most wasps are small and a few are medium size. Most species look very similar as many of them are black in colour with white markings.

Suburban area of Brisbane, Queensland. This spotting was found on the bark of a Melaleuca species tree, commonly known as a paperbark.

When I saw these wasps on the trunk of this Melaleuca, I was so happy that I had finally solved the mystery of what was burrowing holes into the soft bark. However, once I narrowed down any potential species, it soon dawned on me that these were "parasitic" wasps, so what need would they have to burrow holes or build a nest? I had assumed that they simply laid their eggs in the bark of the tree, so did these wasps actually make the holes? Now I'm back to square one because I just don't know, but I did observe them entering the holes. Maybe they're hunting for grubs beneath the bark, and they've chewed holes in order to reach them? I've done a search for insects that nest on paperbarks, but have only found species that inhabit the leaves. Nothing for the bark as of yet. It's a mystery!

Thanks for the suggestion, Saturniidae27. I've updated the spotting details. Yes, they are very similar, and it all gets a bit confusing sometimes :-/

Thank you, ornithoptera80, Suchandra Das, Saturniidae27. I appreciate your comments :)

Nice spotting Neil. This is identical to yours :) https://www.brisbaneinsects.com/brisbane...

Suchandra Das a month ago