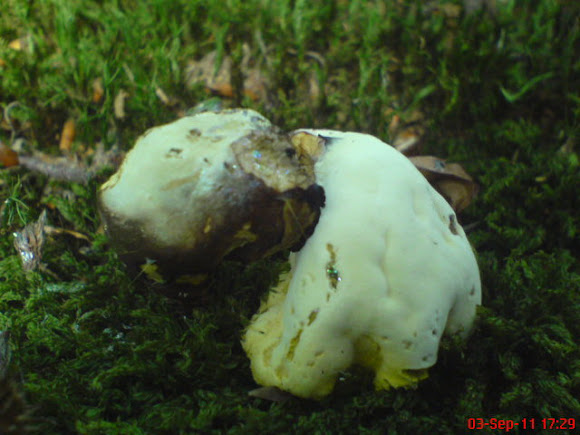 The fruit bodies of B. edulis can be infected by the parasitic mould-like fungus Hypomyces chrysospermus, known as the bolete eater, which manifests itself as a white, yellow, or reddish-brown cottony layer over the surface of the mushroom. Some reported cases of stomach ache following consumption of dried porcini have been attributed to the presence of this mould on the fruit bodies. The mushroom is also used as a food source by several species of mushroom flies, as well as other insects and their larvae. An unidentified species of virus was reported to have infected specimens found in the Netherlands and in Italy; fruit bodies affected by the virus had relatively thick stems and small or no caps, leading to the name "little-cap disease".

-i would not touch him and there was no smell, i also had only visual contact with it, i can not say anythink about :gills,spores,smell (no) or taste (no way) until now, i have found some pictures, from them i will suggest : {(asterophora ) had i first said} then came the first comment with the words:"Looks like Boletus edulis, but covered in mold" --> AND LOOK THE RESULT

The bolete eater (Hypomyces chrysospermus) is a parasitic ascomycete that grows on boletes, turning them a whitish, golden yellow, or tan color. It is found in Europe and North America, as well as southwest Western Australia. Unlike the related Hypomyces lactifluorum, it is inedible.

thanks corduneanuvlad, your comment gave me the hint to the right direction. with your words, have i searched at the internet to get the ID.

Looks like Boletus edulis, but covered in mold. Sometimes I have found mushrooms attacked by other types of fungus, boletus edulis beeing one of them, amanita caesarea beeing another.