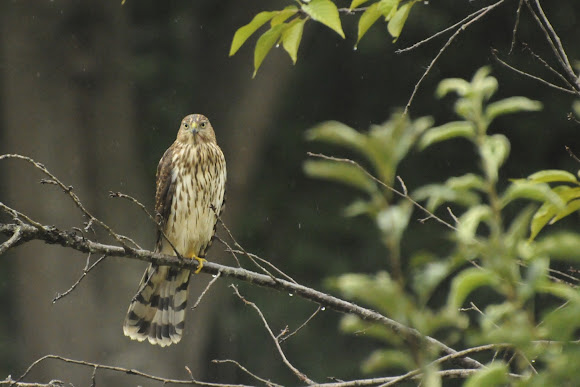 Lives in woods, wood edges; Regularly hunts at winter bird feeders. ---The Stokes Field Guide to the Birds of North America by Donald and Lillian Stokes I spotted this bird on a perch with a view of 4 of my birdfeeders, during a drizzle rain.

Book: The Stokes Field Guide to the Birds of North America by Donald and Lillian Stokes http://www.allaboutbirds.org/guide/Coope... Conservation Status: "At one time, Cooper's Hawks were heavily hunted in persecution for preying on poultry and were called "chicken hawks". It is now known that predation by these hawks on domestic animals borders are negligible, and they are rarely hunted these days. Cooper's Hawks' breeding success was also reduced by the use of the pesticide DDT, but the ban of DDT ended that threat.[10] Since then, the adaptable Cooper's Hawk has thrived. However, one threat facing Cooper’s Hawks today is the degradation and loss of habitat. Management activities like logging may make their former habitat unsuitable for breeding.[4]"--Wikipedia

Beautiful story Heather, certainly must have been a thrilling encounter! Thanks for sharing!

Thanks Kassius - I have to tell you I almost fell over myself when I spotted this bird. I'm used to seeing birds the size of my hand around here and this beauty was just sitting where the little hummingbirds usually perch. It was awesome. I was spotting earlier that day and the feeders were full. Then the rain and the hawk and the little birds took off leaving an eerie silence.

Thanks Emma. I love Jean's spottings and stories.

Hi Heather , i think that you will enjoy this spotting on hawks by Jean. in case that you have not seen it!
http://www.projectnoah.org/spottings/707...

JeanC.Fisher - thank you for the compliment. Raptors amaze me too! Every school I went to, almost, and there have been many, have been a bird of prey - Golden Eagles, Falcons, Osprey, Eagles, etc...one school were were the Road Runners. :-)

Thanks P.Young. I was shocked when I looked outside and saw zero birds at the feeder...then I saw this Cooper's Hawk and knew why. They hunt other birds.

I swapped out the last picture for the one where the Hawk is shaking the rain off his feathers. He looks like a puff ball here and has rolled his eye back it looks like.