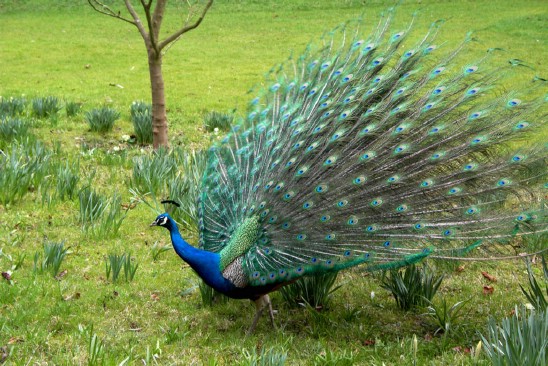 The male (peacock) Indian Peafowl has iridescent blue-green or green colored plumage. The peacock tail ("train") is not the tail quill feathers but the highly elongated upper tail coverts. The "eyes" are best seen when the peacock fans its tail. Like a cupped hand behind the ear the erect tail-fan of the male helps direct sound to the ears. Both species have a crest atop the head. The female (peahen) Indian Peafowl has a mixture of dull green, brown, and grey in her plumage. She lacks the long upper tail coverts of the male but has a crest. The female can also display her plumage to ward off female competition or signal danger to her young.

These birds are native to India, Congo, Burma, Ceylon and Java. In the wild they occupy deciduous rainforests and jungle areas near water. They make shallow nests and locate them in the undergrowth of the forest. The peacock habitat is something breeders are intimately familiar with; a new chick needs a natural environment to grow up healthfully.