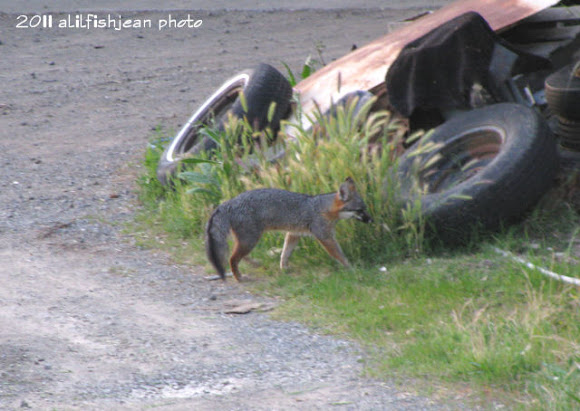 I encountered this little gray fox after a neighbor informed me that a pileated woodpecker which appeared to be injured was taken by two foxes during the few minutes it took me to dash the 50 or so feet to my house to call bird rescue. The neighbor told me the foxes had gone behind a large shop building across the driveway from his house and I peeked around the corner to find one of the foxes (the one pictured) there about 20 ft. away. It started to run when it saw me but, I started speaking to it in a soothing voice -- telling it how pretty I thought it was and how it didn't have anything to fear from me -- and it stopped its retreat, sat down and started grooming itself (licking its paws like a cat) and actually even closing its eyes several times for quite a few seconds each time, seeming to be pretty comfortable with my presence! I dashed back up the driveway to my place to get my camera and, as I hurried back down the driveway to the place I'd seen it, I was amazed to find the little fox had actually followed me most of the way back to my house as though it was curious as to where I'd gone off to! I must've startled it running back with my camera in-hand and it ducked behind a old junkpile of car parts but, I caught this photo before it was out of frame.

We often see the little "foxy woxy family" (as I call them) which, earlier in the year, I'm pretty sure was just "Mama and Papa Fox" but, now, appears to be "Mama and baby fox" as there is a juvenile I've seen a lot at dusk walking with one of the older ones. However, my husband says he's seen all 3 together recently (which, according to what I've read would be sort of unusual with a youngster as large as this one!) I will be posting a photo of the youngest member of the "foxy woxy family" soon!

@ jean ,When animals close their eyes ,they are trying to befriend you.

Thanks for the words of warning, Monkey, but I wouldn't dream of hand-feeding them. I really don't think it would be a very good idea to have them get too used to being around humans. Some of us are very, very harmful to other living things -- unfortunately... :^(

Thanks so much for the additional information, Karen! I just love to see them! We also have coyotes in abundance around here and those are the ones that worry me for the sake of my kitty. <:^0 !

Ashish, Gray foxes are omnivorous but eat far less meat than most other canids. About 70% of their diet is fruit & vegetable based, & they tend to hunt small stuff like grasshoppers & mice. I have a resident fox family that visit my garden 2 or 3 times daily to eat the seed spilled from my bird feeders & any scraps I put out. I often watch them dig for moles but they seem to completely ignore the rabbits which often hang around only 15 or 20 feet away & the birds continue to use the feeders when they are there! All foxes are opportunists though & I'm sure an injured woodpecker was too good a treat to miss!

I only can think of being "harmful" if they bite - rabies and other infections... so please do not handfeed them...

Thanks so much, Monkey and Ashish! The gray fox (from what I'm able to determine) are only "harmful" if one happens to raise chickens or other fowl, Ashish. My "best buddy" is my black cat, Mr. Lucky, so I read everything I could find about interactions between foxes and pets and it seems that there is no incident to be found where a wild fox has harmed either a cat or a dog! In fact, the other evening, my kitty and I were standing across the driveway when "Mama and Baby Foxy" strolled casually past us -- within about 6 feet of the both of us! They neither hurried, tried to avoid us nor made any moves whatsoever toward Mr. Lucky or me -- they just kept up their leisurely pace right on past us and up the hill!

Nice experience..!!
How harmful are they..?

very nice story! thanks for sharing! ;)