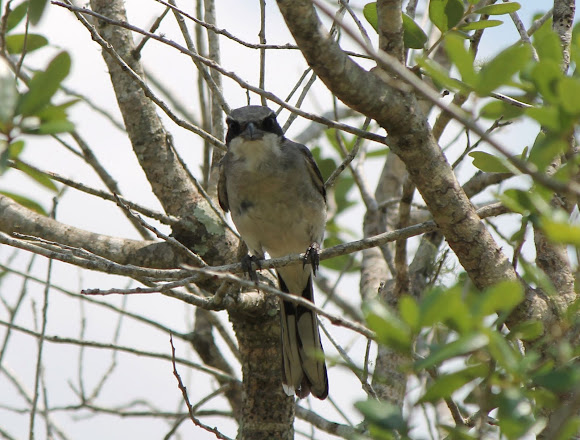 A small gray, black, and white bird of open areas, the Loggerhead Shrike hardly appears to be a predator. But it uses its hooked beak to kill insects, lizards, mice, and birds, and then impales them on thorns to hold them while it rips them apart. The Loggerhead Shrike is a predator, but it does not have the strong feet and talons of a raptor. It does have a strongly hooked bill for gripping flesh, and a strong notch or "tooth" near the bill tip that helps sever the spinal cord of its prey. It uses thorns and barbed wire to hold large prey while it rips it up, and may wedge prey into a fork in a branch for the same purpose. Loggerhead Shrikes need large territories and thus are found only in low densities. They hunt by watching from high perches, then flying swiftly down after prey. Shrikes use their hooked bills to break the necks of vertebrate prey. Because their feet are not large or strong enough to hold prey, shrikes find a crotch in a tree, a thorn, or barbed wire to hang their prey on while they eat. Prey may be left on such a site for later consumption. Diet The Loggerhead Shrike is predominantly an insect-eater, especially in the summer when it feeds largely on grasshoppers. It also occasionally eats small lizards, rodents, and small birds.

Loggerhead Shrikes are found only in North America. They breed in open country, including grasslands and shrub-steppe areas, where there are scattered trees, tall shrubs, fence posts, utility wires, or other lookout posts. They tend to nest in northeast- or southeast-facing ravines. Loggerhead Shrikes prefer more open country than that preferred by Northern Shrikes.

Thank you so much Anthony, appreciate it!