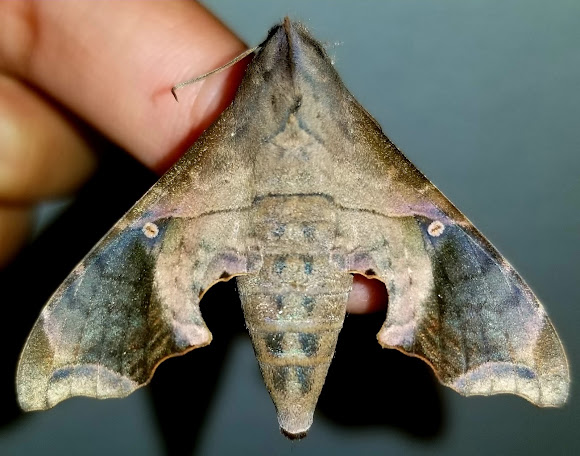 It is a medium black moth with a robust body in the family, (Sphingidae). The moth has angled wing curves with black on the exterior part of the forewings and brown torwards the interior forewings. and the hindwings. the forewings also have a small white spot and a line in front of it. The abdomen is about 2 cm. thick white five sets of two black spots and a line continuing the forewing line. The specimen was a female due to the tip of the abdomen not having claspers which males have. The size of the abdomen as well. The wingspan of this moth was about 55 mm. with max being about 60 mm. This moth has two small and quite stubby antennae with a fuzzy body covered in short brown legs. The thorax of this moth has a mo-hawk. The eyes are large like in most Sphingidae making it's sensing ability to ultra violet light rays at max. This moths wings and body shape can fly at speeds up to 20 mph and some species of sphinx moths as much as 25 or more mph.

Denton, Texas, Lake Lewisville. It was attracted to a metal hallide light right outside of a building that was near lots of vegetation and a lake. The moth mostly prefers tropical or hot weather but can be found more north.

It is found from Argentina and Paraguay to Uruguay, Venezuela, Guyana, Surinam, French Guiana, Colombia, Ecuador, Peru, Brazil and the West Indies through Belize, Guatemala, Honduras, El Salvador, Nicaragua, Costa Rica and Panama to Mexico and the United States, where it has been recorded from Arizona east to Florida and north to South Carolina. Strays have been recorded from Arkansas, north to Illinois, Michigan and New York. The caterpillars are fond of grapevines, (Vitis sp.), also false grape, (Cissus sp.), and Porceainberry, (Ampelopsis sp.). The favorites out of these are Vitus tiliifolia, Cissus sicyoides, and Ampelopsis arborea.

Beautiful spotting. Notes are awesome too!