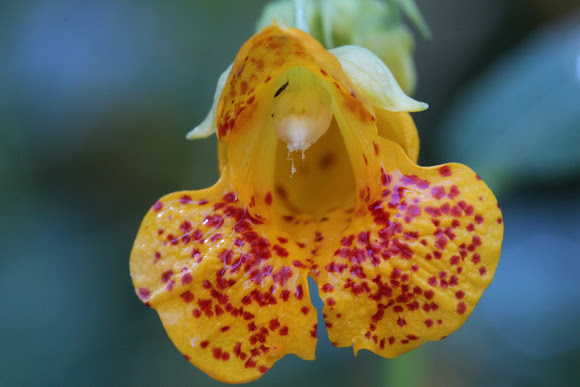 The flowers are orange with a three-lobed corolla; one of the calyx lobes is colored similarly to the corolla and forms a hooked conical spur at the back of the flower.

I spotted this at Fireman's Park. There were a few large areas covered by Jewelweed. Impatiens capensis was transported in the 19th and 20th centuries to England, France, the Netherlands, Poland, Sweden, Finland, and potentially other areas of northern and central Europe. These naturalized populations persist in the absence of any common cultivation by people. This jewelweed species is quite similar to Impatiens noli-tangere, an Impatiens species native to Europe and Asia, as well as the other North American Impatiens. No evidence exists of natural hybrids, although the habitats occupied by the two species are very similar.

Welcome Dan... I find this Common ID very unique and as mentioned on Wiki page means used in American area. You must find caterpillars when plants grow... Iike in India October month such Balsam plants are fully grown and ready to feed Hawk Moths caterpillars. A great part to watch in Web of Life.

I feel you must use Spotted Jewelweed what is represent this very cute Balsam Flower...
http://en.wikipedia.org/wiki/Impatiens_c...

Thanks Ashish. I have seen other spottings of this. I have identified a few myself, so I know they are here. Maybe they are called orange jewelweed and not showing up as a related spotting? I'm not sure.

So sweet flower... Thanks Dan for sharing here.... See no one spotted without you...as no Related spotting...like this...!!