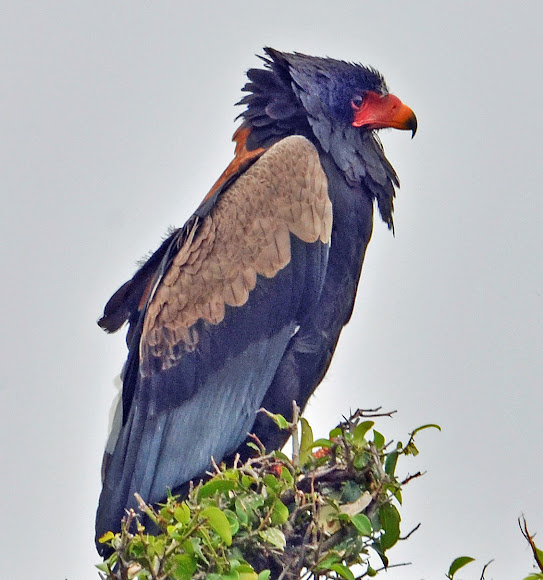 The Bateleur eagle takes its name from the French word for tight-rope walker, due to the bird’s habit of rocking from side to side in flight. The adults are colourful, with a blackish-blue, chesnut, grey and white plumage, and red bill, facial skin and legs. The tail is short. Wingspan up to 175 cm.

Placed in the Near-Threatened IUCN Red List Category due to loss of habitat, pesticide poisoning, and capture for international trade. See the appearance of the bird on the shots where it fluffs itself up: this has earned it the nicknames of Conifer or Pine eagle.

Thank you Zlatan and everyone else!

a real beauty, this one!

Thanks Mona, Rieko and Christine!

I agree with Mona. It is stunning and beautiful spotting.

Thanks Joshua! What's nice about the bateleur is that it's colourful for an eagle.

This is one of the most awesomely epic birds I have ever seen. How have I not heard about this raptor? Also, great pictures Daniele.

Great spotting! Love the forth picture!!!

Wow, you have some truly incredible spottings!

Thanks East End aka Lorelei!

Thanks you williefromwi! And Welcome to Project Noah.

Fantastic capture and valuable insight on this magnificent bird of prey

and 158 other people favorited this spotting