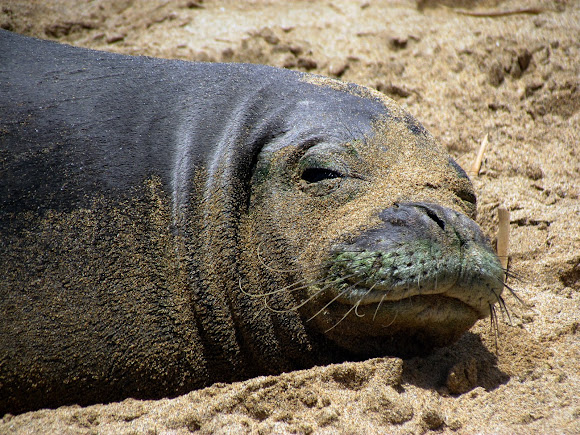 The Hawaiian monk seal is the only seal native to Hawaii.[5] Its grey coat, white belly, and slender physique distinguish them from their cousin, the Harbor seal.

The monk seal’s physique is ideal for hunting its prey: fish, lobster, octopus and squid in deep-water coral beds.[6] When the Hawaiian monk seal is not spending its time hunting and eating, it is generally hauling-out on the sandy beaches and volcanic rock of Northwest Hawaiian Islands.[7] These monk seals are a conservation reliant endangered species. A small population of about 1,000 individuals is threatened by human encroachment, very low levels of genetic variation, entanglement in fishing nets, marine debris, disease, and past commercial hunting for skins.

Walking along the beach we came apon this seal. I was concerned because he was on the beach. We were told Monk Seals often climb up on the sand to sun themselves and nap. What a treat!

Yes, Julian. He was just hanging out on the beach in Maui and they had a yellow police tape wrapped all around him so folks wouldn't get close. You are very smart! Do you live in Hawaii? I live in Alaska.....

It's illegal to come closer than 50meters to them did u zoom?