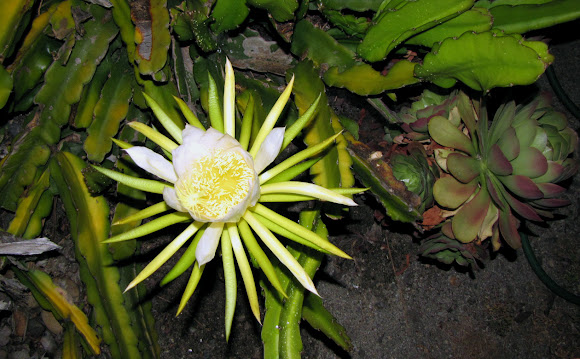 Nightblooming Cereus is the common name referring to a large number of flowering cereus cacti that bloom at night. Because of the short life of the flowers, the nightblooming cereus has a romanticized reputation and has given rise to erroneous beliefs, such as that the plants bloom only once a year, or only on nights when the moon is full[citation needed] The nightblooming cereus is also referred to as Princess of the Night, Honolulu Queen (for Hylocereus undatus, commonly grown in Hawaii), Queen of the Night, or Reina de la Noche.

The third picture is the fruit with the old flower still attached to it. Sometimes it's called dragonfruit, and it's edible.