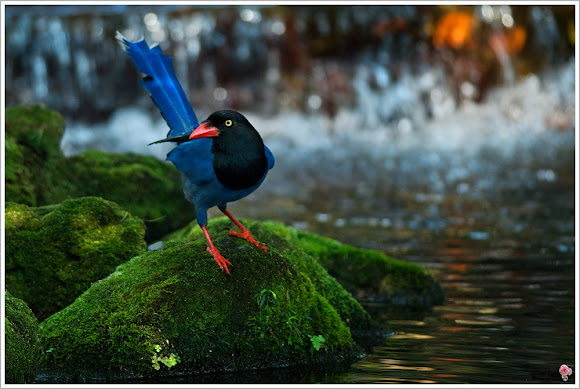 The Taiwan Blue Magpie is about the size of European Magpie, but with a longer tail. It is 64-65 centimeters in length. Wing measures 18-21 centimeters and tail measures 40 centimeters in length. The plumage of male and female look alike. Its head, neck and breast are black; eyes are iridescent yellow; bill and legs are red; the rest of the plumage on the bird is a rich dark blue to purple in color. It also has white markings on the wings and the tail.

The Taiwan Blue Magpie is unafraid of people. Their traces can be found in proximity to human residences in the mountains or newly cultivated lands. They are gregarious and are usually found in groups of six or more, gliding and shuttling in the woods. When flying in a group, the birds tailgate each other. Sometimes they may be seen strung out as if in line. Similar to other members of the crow family, they have a raucous call which is described as a high pitched cackling chatter, "kyak-kyak-kyak-kyak", and they are well known scavengers and omnivores. Their diets include snakes, rodents, small insects, plants, fruits, and seeds. Wild figs and papayas are their favorites. They are known to store leftovers on the ground and cover them with leaves for future retrievals. Sometimes they store foods in the leaves or branches.[3]

very nice. can i make this my wallpaper? :)

great series! what a wonderful bird!

Awesome! You can add this to the new "color blue" mission:
http://www.projectnoah.org/missions/8382...

WoW!! That doesn't even look real, more like a painting! Great photos and video as well.

Beautiful bird and a nice series of photos!