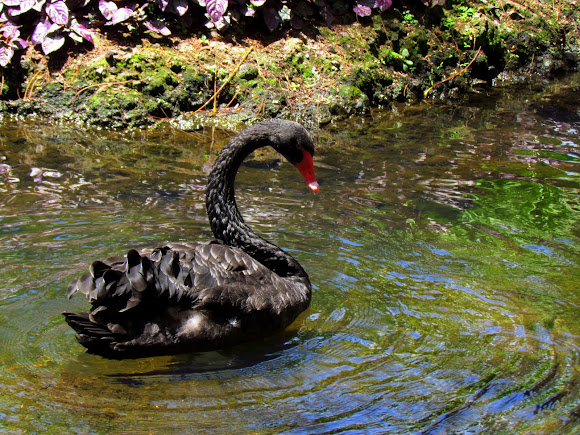 Swans are the largest of the water fowl and among the most graceful despite their size. They are readily distinguished from geese by their elegant necks, which are often longer than their bodies. The Black swan is completely black except for a white area on the wings which shows only in flight. The red bill has a pale band at the tip but no basal knob. The Black swan usually holds its neck in a flowing S-curve, with its beak pointed downward. With a wingspan of 6 feet, it is a large unmistakable bird that is easy to domesticate.

Black swans are native to Australia where they are found mainly in the south. Up to 50,000 have been counted at a single location. They now exist in a semi-wild state in New Zealand and Sweden. In New Zealand they thrived so well that control was soon necessary as the birds were interfering with native species.

Once they mate, swans remain together for life. Both partners share in building their nest, defending and incubating their eggs and caring for their young.