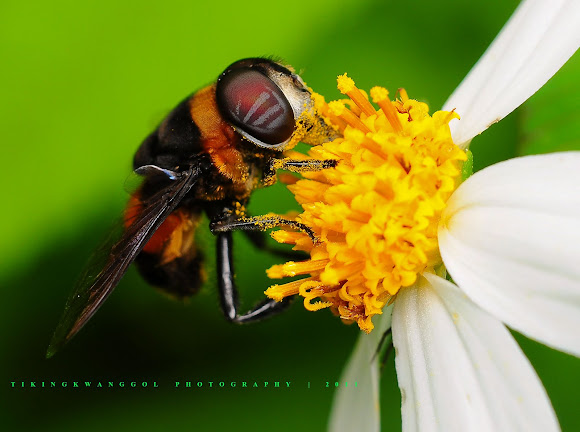 Eristalis tenax is a European hoverfly, also known as the drone fly (or "dronefly"). It has been introduced into North America and is widely established. The larva of E. tenax is a rat-tailed maggot. It lives in drainage ditches, pools around manure piles, sewage, and similar places containing water badly polluted with organic matter.[2] The larva likely feeds on the abundant bacteria living in these places. When fully grown, the larva creeps out into drier habitats and seeks a suitable place to pupate. In doing so it sometimes enters buildings, especially barns and basements on farms. The pupa is 10–12 mm long, grey-brown, oval, and retains the long tail; it looks like a tiny mouse. The adult fly that emerges from the pupa is harmless. It looks somewhat like a drone honey bee, and likely gains some degree of protection from this resemblance to a stinging insect. The adults are called drone flies because of this resemblance.

Like other hover flies, they are common visitors to flowers, especially in late summer and autumn, and can be significant pollinators

thanks man...really had a great time taking those lovely insects...:-)

Wonderful photograph!! You have a great collection of insect photographs!!

thanks bro...by that time i really had a hard time upon taking those photos...just a month ago that i got my macro lens...so some of my photos was taken by my ET set-up...

wow, even do not the macro lens, you shoot very well... good job bro!

for this shoot i used 50mm prime+25mm ET,and a DIY diffuser (cover of an ice cream box) sir...

what lens you use? DIY diffuser?