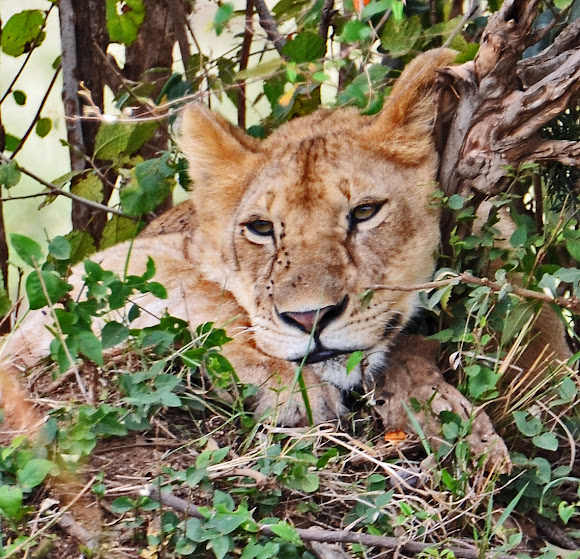 This African lion cub was spotted in the Masai Mara enjoying a lazy morning in a bush hide with his pride and a well hidden fresh kill. The cub was part of a pride of 4 females and 2 cubs. See some tender family moments in the extra shots. There were no adult males around at the time.

Savanna grasslands with scattered Acacia trees for shade. Most African lions are now found in Eastern and Southern Africa. They are a vulnerable species and their numbers are unfortunately still decreasing, with estimated 30–50% decline over the last two decades.

A second cub can be seen behind the lioness in the 5th shot. Their kill is hidden right behind them. The shots were taken from a distance of about 10 m. At the time lions were eating every day in the Mara, as recent rain resulted in large numbers of wildebeests still hanging around. If you find yourself in the Northern Mara Conservancy and nearby parts of the Mara, you can submit your lions sightings to The Mara Predator Project (http://livingwithlions.org/mara/). The project's website provides an ID guide to IDying individual lions, to help researchers track prides (unfortunately this spotting was in a different part of the Mara). I found out about this site in the following BBC article on nature apps, where Project Noah is also discussed: http://www.bbc.co.uk/nature/13454621 or read about it under the Press section on this site.

This is an amazing series! Their expressions are fantastic!

Okay. Thats what I thought I just wanted to be sure.

Hi mmsbiodiversity94! For this shot I was about 30 feet away inside a vehicle, using a telelens. Getting out or any closer would be unwise.

The Mother let you just stand there and take photos of it?!!

Thanks Emma and Satyen!
Emma, indeed they could be tsetse flies. The tsetse flies are quite large though but I wouldn't be able to say for sure what these were; they could also be stable flies (Stomoxys calcitrans) which have been known to bother lions in this area.

@ daniel,all the pics are superb.Number 4 is my favorite. The flies could be Testse flies which are a real nuisance and they really harass the poor lions!

Lovely collection you have got back from Kenya.

wow! what a great series! If I were you I print 8 by 10 and then I would make a nice wall mounting. Super Photo !!

Thank you Carolina and Ann!
Ann, yes these are flies (I checked them out with the binoculars). They can be seen flying off the lioness's back on the fifth shot. Wild lions are also often infected with various species of tick in the ears, neck and groin areas.

Superb photos!
Are black spots on their fur flies?

Uploaded a 6th pic which wasn't loading up properly in the first place.