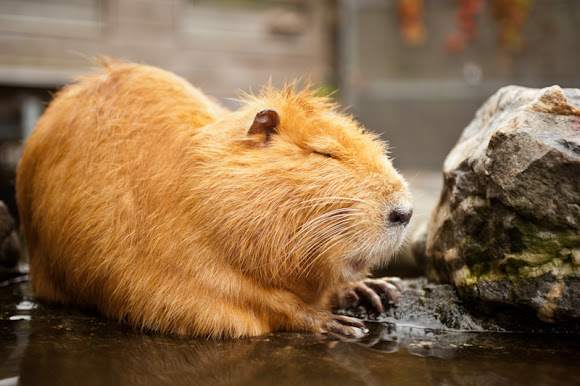 The coypu, also known as the river rat or nutria (Myocastor coypus), is a large, herbivorous, semiaquatic rodent and the only member of the family Myocastoridae. Originally native to subtropical and temperate South America, it has since been introduced to North America, Europe, Asia, and Africa, primarily by fur ranchers. Although it is still valued for its fur in some regions, its destructive feeding and burrowing behaviors make this invasive species a pest throughout most of its range.

Spotted in Artis, the Amsterdam zoo

They are cute! We saw wild coypu in the mangrove swamps in cuba. The guide managed to pick one of the young ones up & held it for us to stroke. I suspect this particular individual had been orphaned & hand reared as it was very comfortable around humans & more than happy to have it's belly rubbed!

@Marta, It does look cute, but I doubt whether they are really that cute (check the teeth!)