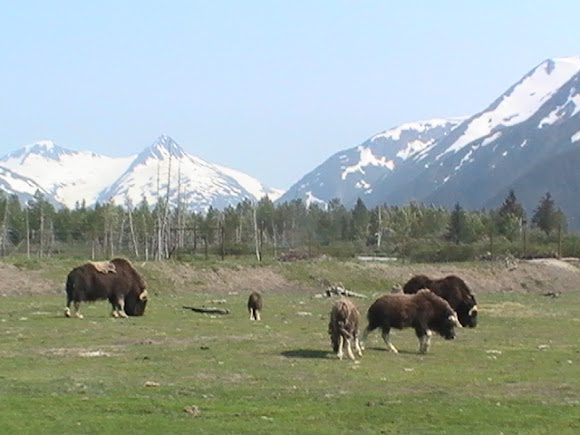 The musk ox, Ovibos moschatus, is an ancient species of arctic mammal currently found in remote areas of the far north, including Greenland, Alaska, Canada and Siberia. During the Pleistocene, musk oxen wandered across the Bering Land Bridge to populate North America with the likes of the woolly mammoth, saber-toothed cat, and giant ground sloth. Fossil records indicate musk oxen ranged across Europe, Asia and North America during the last Ice Age, roaming as far south as France and Ohio. They lived both in Arctic regions that were not glaciated as well as more southerly regions beyond the ice sheets. At the end of the Ice Age, they died off in more southerly regions but persisted in the north.

Herd of Musk Oxen and baby. Muskoxen are occasionally domesticated for wool, meat and milk.[citation needed] The wool, qiviut, is highly prized for its softness, length, and insulation value. Prices for yarn range between $40 and $80 per ounce (28 g).