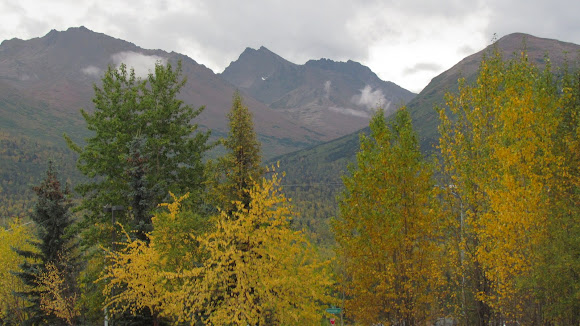 This tree typically grows to 15-20 m tall, occasionally up to 25 m, and achieves a trunk diameter of 20-40 cm, rarely to more than 60 cm, and a narrow crown. It grows in a variety of habitats, from wetlands to ridgetops at altitudes of 100-1200 m. The mature bark ranges widely in color, from pure white to red, yellowish, pinkish, or gray. Bark of twigs, seedlings, and saplings is dark, from reddish to almost black, and covered with resin glands. The leaves are triangular-ovate, 3-8 cm long and 2-6 cm broad, with a truncate base and an acuminate apex, and a double-serrated margin. The fruiting catkins are 2-4 cm long and about 1 cm broad.

Betula neoalaskana (syn. B. resinifera) or Alaska Birch, also known as Alaska Paper Birch or Resin Birch, is a species of birch native to Alaska and northern Canada. Its range covers most of interior Alaska, and extends from the southern Brooks Range to the Chugach Range in Alaska, including the Turnagain Arm and northern half of the Kenai Peninsula, easterward from Norton Sound into western Ontario, and north to Northwest Territories and southern Nunavut.

Birch Fall colors in Alaska. Birch Syrup is a truly unique flavor from Alaska's forests - and quite rare.