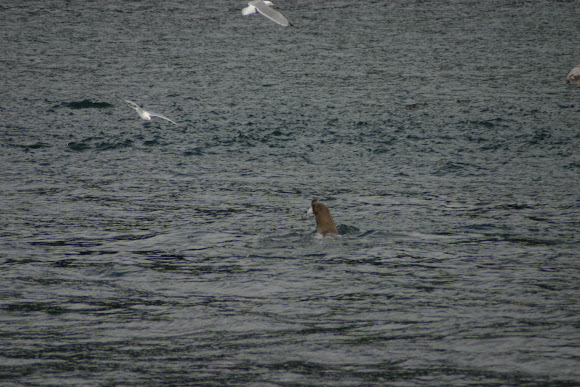 Adult animals are lighter in color than most sea lions, ranging from pale yellow to tawny and occasionally reddish.

The range of the Steller sea lion extends from the Kuril Islands and the Sea of Okhotsk in Russia to the Gulf of Alaska in the north, and down to Año Nuevo Island off central California. They formerly bred as far south as the Channel Islands but have not been observed there since the 1980s. Based on genetic anаlyses and local migration patterns, the global Steller sea lion population has traditionally been divided into an Eastern and Western stock at 144° W longitude, roughly through the middle of the Gulf of Alaska

This sea lion was spotted in Lynn canal off of Juneau, Alaska playing keep away with the sea gulls.