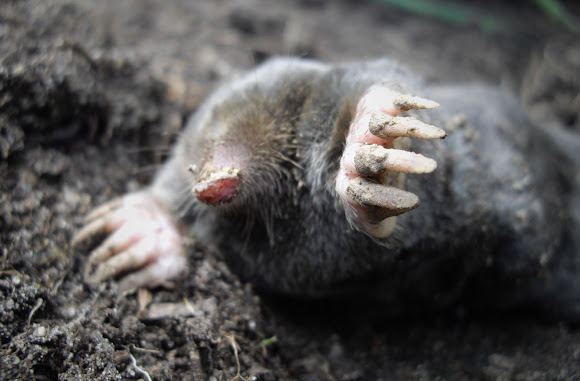 This mole lives in an underground tunnel system, which it constantly extends. It uses these tunnels to hunt its prey. Under normal conditions the displaced earth is pushed to the surface, resulting in the characteristic molehills. It feeds mainly on earthworms, but also on insects, centipedes and even mice and shrews. Its saliva contains toxins which paralyze earthworms in particular. It has a cylindrical body and is around 12 cm (5 inches) long. Females are typically smaller than males. The eyes are small and hidden behind fur, while the ears are just small ridges in the skin. The fur is usually dark grey, but the actual range of colors is larger, as due to the subterranean habits there is no disadvantage in having off-coloured fur. European moles with white, light grey, tan, taupe, and black fur have all been reported.

Thanks a lot, Maria

Thanks a lot Emily and Gerardo

This might be the cutest thing I've seen on PN in a while! Great series!

right, I just catched the hills.

Great job, they are not easy to find (at least without intervention of any cat).
And - of course - beautyful pictures.

Thank you - I was lucky catching it

Amazing. Just love everything on this photo. The colors (or absence of it), the mood, the angle,... Thanks for sharing.

Good photos - you spotted him above ground?

Yes, indeed that's how I saw them usually, too - deceased.
Thanks for the comment.