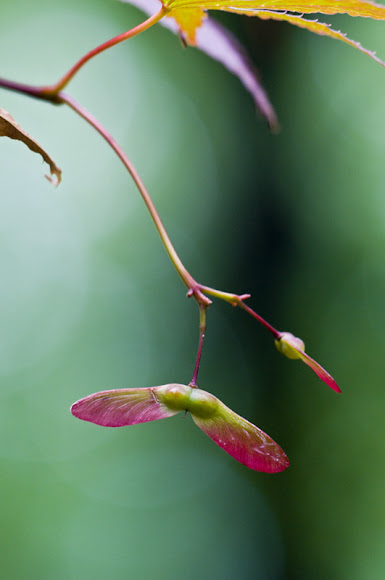 from wiki: Acer palmatum is a deciduous shrub or small tree reaching heights of 6–10 m, rarely 16 m, often growing as an understory plant in sunny woodlands. It may have multiple veins joining close to the heart of the leaf. In habit, it is often shaped like a hemisphere (especially when younger) or takes on a dome-like form, especially when mature. The leaves are 4–12 cm long and wide, palmately lobed with five, seven, or nine acutely pointed lobes. The flowers are produced in small cymes, the individual flowers with five red or purple sepals and five whitish petals. The fruit is a pair of winged samaras, each samara 2–3 cm long with a 6–8 mm seed. The seeds of Japanese maple and similar species require stratification in order to germinate. Even in nature, Acer palmatum displays considerable genetic variation: even seedlings from the same parent tree typically show differences in such aspects as leaf size and shape, and color.

this particular tree lives near the entrance of Lingyin Temple just west of West Lake, Hangzhou. "Japanese" maple are quite common throughout China, Japan, and Korea and those that are commonly seen are some of the most well tended trees along with Gingko and Pine(species like Pinus parviflora or Pinus densiflora) trees.