Soldier Fly with a Pseudoscorpion 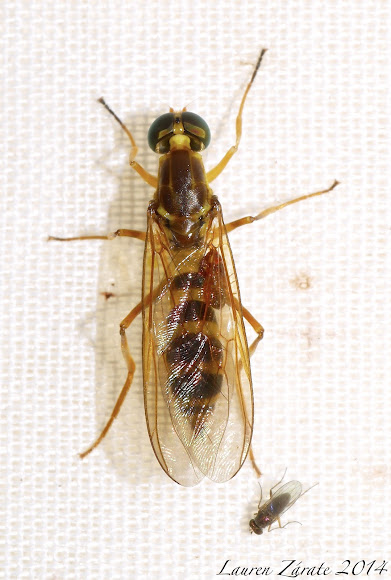 Large Soldier Fly, 1.5 cm long, wasp-colored like an Ichneumonid and very active and agitated. It had something attached to it's thorax (Pictures 1 and 2) so I put it in a jar to watch it and a 2 mm long Pseudoscorpion detached from the fly during the night. These are usually predators of other small arthropods but are also known to be phoretic on insects. I've found them under the wings of both large scarabs and Passalid beetles. This the first time I have ever found one on a fly! Family Stratiomyidae, Subfamily Sarginae..

It's agitated behavior may have been due to the presence of the pseudoscorpion attached to his thorax.

Hi Hema, Thank you! Hopefully it wasn't biting the fly, they are usually just phoretic and hitch hiking a ride. But it was so big that it must have felt very uncomfortable having it under it's wing.

It was probably hurting by the bite of the pseudoscorpion.Yesterday a bug decided to bite me real hard . It was so tiny but it hurt so bad. For this little soldier fly the bite might be like being stabbed 100 times with a knife.

That's a pretty amazing spotting then. All aboard for Albuquerque.