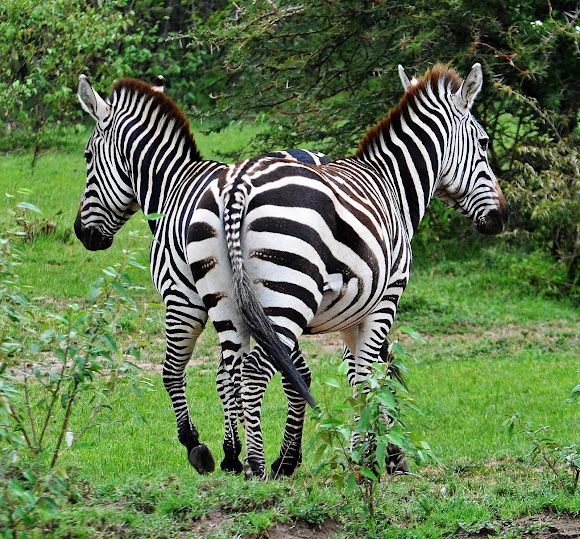 These two plains zebras spotted in the Siana Conservancy near the Masai Mara offered an interesting optical illusion. Like all zebras, plains zebras are striped in black and white and no two individuals show a striping pattern exactly alike. Extra shots show more of the plains zebra habitat and companion species.

Spotted in savanna woodlands. Most often found in treeless grasslands and savanna woodlands, at elevations of up to 4300m ASL. Distribution: from South Sudan and southern Ethiopia through Eastern Africa, to Zambia, Mozambique, Malawi and most southern African countries. Plains zebra is the most common and geographically widespread species of zebras. Unfortunately regionally extinct in Burundi and Lesotho.

The fourth shot shows an adult zebra with three younger animals showing a browner coat; the natal coat of a zebra foal is brown and white. The zebra on the fifth shot is carrying some oxpeckers, which feed on the animal’s external parasites. On the last shot zebras are shown together with blue wildebeest, with which they often share pastures and migrations patterns. The first three shots were taken in the Siana Conservancy, the remaining ones in the nearby Masai Mara. In recent years several conservancies have been established around the Masai Mara. While the Mara itself is a reserve proper (a full wildlife sanctuary where no domestic animals or local settlements are allowed), in conservancies wildlife cohabits with local populations are their cattle. The wildlife roam freely across both the reserve and conservancy areas and form a continuous ecosystem. Find out more about the Siana Conservancy at: http://www.maasaimara.com/community-cons...

Thanks Karen! This reminds me that I haven't posted my giraffe yet... lots of oxpeckers there too!

I love the oxpeckers in the 5th photo!

coming out of one !!!!!
great illusion

New study just published in Science shows that the presence of zebras is beneficial to cattle during the wet season:
http://www.sciencemag.org/content/333/60...

Thanks Cindy! I'll send a message to admin. In my case it doesn't even seem to be related to file size...

Added a 6th pic to this spotting which would not upload properly when the spotting was first created. Does anyone else have the same problem?

Great picture. Some photographers wait for a lifetime for an oportunity like that!

Thank you Atul and Satyen!
Atul the birds are yellow-billed oxpeckers (Buphagus africanus). Sorry I couldn't get a better shot, but you'll see them again on some buffalo shots I'll post soon. Satyen cute that you're youngest think they are stuck! To me, they look like one single zebra with one rear and two heads ;-)

I agree with Atul, Daniele, great pics and info. The first one is indeed an optical illusion. My younger one thinks they are stuck. Great click.

great pics Daniele especially the first one,its an optical illusion.
and of course great info.wish you had a snap of the littne birds too in the fifth shot,really cute birds.