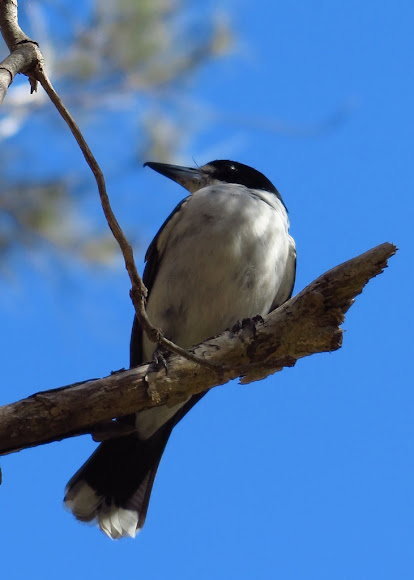 The Grey Butcherbird is an Australian native songbird of the family Artamidae. They have a black crown and face, a grey back, and a thin white collar. The wings are grey with large areas of white, and the underparts are white. But unlike the Pied Butcherbird, the grey's have no black bib. In this spotting, it's the easiest way to tell the two species apart. Spotted with my PN buddies Shanna Bignell and Pamela Sai. Thank you both for such a wonderful day :-) More detailed information on this species can be found at a previous spotting, also in Brisbane - http://www.projectnoah.org/spottings/226...

I've added the video so you can hear the beautiful duet of these songbirds. These are Pied Butcherbirds, but the greys sing just as merrily. A long video, but you'll get the idea. 7 minutes in and a Magpie makes an entrance, and also sings a very brief song.

I took two photos of this bird, but it was high in the tree so I was lucky they came out at all. You'd enjoy Australia. I'm four kms from the CBD, but in the last 10 minutes, sitting on my patio, there's been a cacophony of bird song/screeching from 2 butcherbirds, about 100 rainbow lorikeets, 2 magpies, dozens of noisy miners, crows, 2 cockatoos, and a cranky kookaburra, all at the same time. It's noisy in the burbs!

I can't get over how neat this spotting is! Great job Neil.

So beautiful! What a lovely song! I've never heard anything quite like it. Thank you for sharing! And beautiful picture as well :)