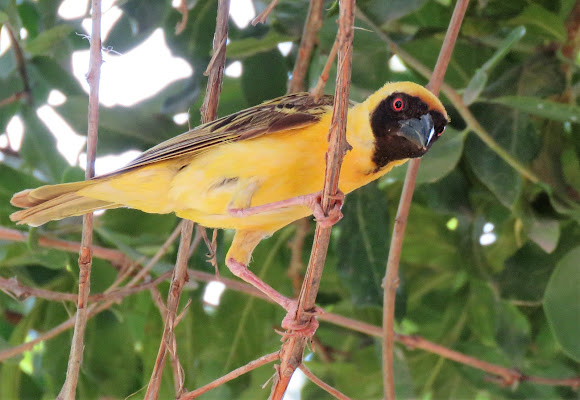 This attractive acrobat is the Southern masked weaver, a near endemic weaver whose distribution is confined to Southern parts of Africa. Picture 1 to 4 depict a breeding male, and elements to establish its ID from other similarly looking eavers from its range are as follows: red eye; black mask not extending to the crown and ending with a point toward the throat; massive black bill; pinkish legs; and a mantle relatively free of spots, scales and blotches - the mantle is rather uniformly diffused in olive green. The rest of the body is bright yellow. Picture 5 shows the structure of the nest, with the entrance pointing down; and the pic N° 6 shows the female.

I observed this one for few hours that afternoon and one hour next morning in a guesthouse in Opuwo, small town in the central part of Kunene region. The guesthouse had a small and very green garden with few trees; and a couple of these warblers were busy hunting all time. Garden itself is the continuation of a habitat around it, a mixed savannah-woodland; mopane, acacia and some other broad-leaved trees, with taller grasses in between. This part of the region has recently received some rains, and grasses seem to be recovering, while the southern parts of the region are still very dry.

This fella was really aggressive, and I suppose he was defending a small colony of nests - there were about 10 to 12 of them spread in three trees. As I observed it, some other guests would venture in the shade of these few trees, an the bird would fly straight down from its branch, make a loop close to the floor and fly upwards closely to the face of culprit, and it would repeat this operation few times if the person did not leave... Spectacular.